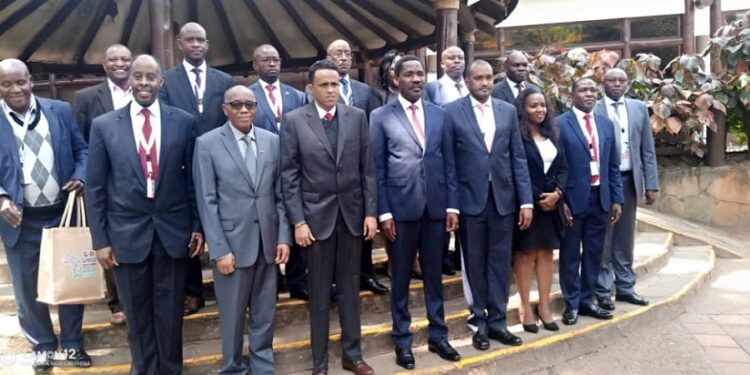 The Minister of Agriculture Minister, Animal Industry and Fisheries, Frank Tumwebaze has asked African countries to adopt Uganda’s successful coffee experience as a strategy for increasing production and supporting the value chain of coffee stakeholders in a sustainable way.

The Minister made these remarks while speaking at the G25 Africa Coffee Summit in Nairobi, Kenya this week under the theme “Sustainable Development and Economic Growth in the African Coffee Sector”.

“Coffee remains Uganda’s priority commodity and plays a leading role in the livelihoods of many Ugandans. For the past two decades, coffee has contributed an average of 17 per cent to the country’s foreign exchange earnings and has provided employment for many of our people,” Tumwebaze said.

Uganda is currently ranked Africa’s largest exporter and 7th globally and according to Tumwebaze, the greater increase in Uganda’s coffee exports is mainly attributed to the successful policies initiated by the government combined with partnerships established between youth group farmers, associations, civil society and service providers across the entire coffee value chain.

He noted that in April 2017, the Coffee Roadmap was launched after a directive given by President Museveni to increase the coffee production from 3.5 million bags to 20 million bags by 2030.

“Consequently, since the launch nearly 5 years ago, a number of interventions aligned to the coffee Roadmap have been implemented and have profoundly contributed to increased production by 101 per cent from 4.0 million 60 kilo bags to 8.06 million bags in FY 2020/21 and improved the quality of Uganda coffee,” the Minister stated.

He added that the production and value addition interventions undertaken by Uganda in the past 5 years have undoubtedly contributed to improved employment and increased forex earnings by 71 per cent from 3.6 million 60 kilo bags in 2015/16 to 6.1 million bags in FY 2020/21.

Meanwhile, despite these achievements, Tumwebaze said as African producers, they still have a long way to go in strengthening the coffee value chain and improving the livelihoods of farmers.

“We are still faced with challenges of low production and productivity, price volatility, lack of access to affordable finance, counterfeit inputs/fertilizer, pests, disease just to name a few,” the Minister said, adding that Uganda remains optimistic that as the youngest continent in the world, with the lowest coffee per capita consumption, combined with the creation of the Africa Continental Free Trade Area (AfCFTA), the future of the coffee industry in Africa remains bright.

He revealed that the Ugandan government remains committed to supporting an integrated African coffee strategy that collaborates with all key stakeholders both at the national and regional level that will ensure the sustainability of the African coffee sector across the entire value chain.

Uganda will host the second G25 AFRICAN SUMMIT in Kampala in 2023.