by Stephen Kalema
in News, Politics
1 1 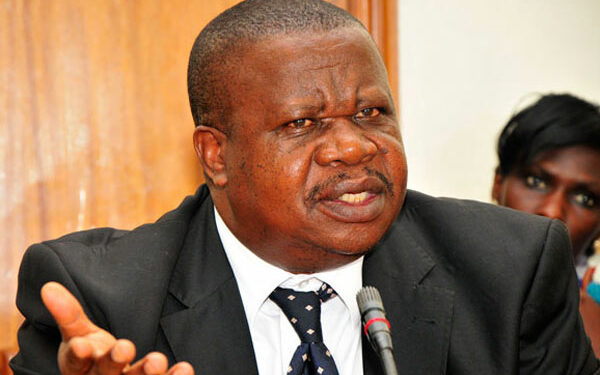 The Minister of Internal Affairs, Maj General Kahinda Otafiire has said Africa as a continent is suffering because of her leaders who have failed to adopt Pan-Africanism values.

Gen Otafiire who also serves as the Chairman Global Pan African Movement, made this revelation on Tuesday while speaking about the commemoration of the 59th Anniversary of African Liberation Day (ALD) at the Ministry of Internal Affairs headquarters, in Kampala.

He said Africa is still being influenced by the western pressure because of her weak leaders.

“On this note, the movement is disappointed by Africa’s leadership for having failed to adopt the values of Pan Africanism, something that would have helped to avert and avoid the problems which affect us today. Hence the need to dismantle all the colonial structures, fight off imperialism and unify as people of African descent,” he said.

He added that while Africa commemorates the 59th anniversary of Africa’s liberation, Pan Africanism is facing new forms of challenges alongside the traditional neocolonialism, as they strive toward the last frontier in ensuring unity and self-reliance of Africa and its people worldwide.

“In that same regard, we regret the recent disastrous storms which devastated parts of Africa, terrorism activities, a war in Libya, and the uncontrollable migration of our people in search of so-called greener pastures. These challenges threaten Africa’s strategic future,” Gen Otafiire said.

“We also condemn the escalation of pressure and acts of the Western Government and their allies in their pursuit of imperialistic interests with their interference with sovereign states especially Venezuela, Cuba, Nicaragua, Zimbabwe and other countries. We, therefore, join the rest of the world voices to call for respect of world independence-respecting each other regardless of its size, strength, ideology and influence.”

The Minister added that the Plan African Movement is now ready to explore together with the African Union, the Economic Regional Blocs, youth and women movement, new strategies to enhance Africa’s long-desired fronter of liberating the continent and its people from imperialism leading to the realization of an undied African government.

He noted that African people from either the continent or Diaspora share cultural and historical similarities based on the struggle of anti-slavery, colonialism, neocolonialism and identity challenges. Therefore, ALD serves the purpose of forging unity and cooperation. And this year’s theme is ‘The Africa we want: A call for true African integration and empowerment’.

“On my behalf and on behalf of the Global Pan African Movement I would like to congratulate the African Union and the Regional Economic Communities, African states and all people of African descent upon our 59th anniversary of the African liberation day and the founding of the Organization of African Unity (African Union),” he said.

Meanwhile, Africa Day (formerly African Freedom Day and African Liberation Day) is an annual commemoration of the foundation of the Organization of African Unity on 25 May 1963. It is celebrated in various countries on the African continent, as well as around the world. The organization was transformed into the African Union on 9 July 2002 in Durban, South Africa, but the holiday continues to be celebrated on 25 May.