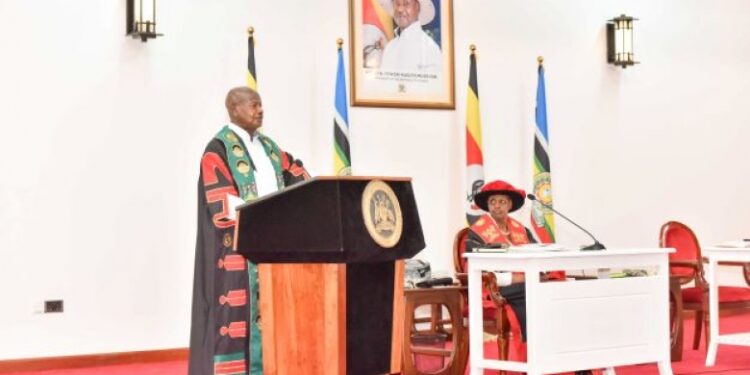 President Yoweri Museveni has commended Makerere University for its contribution to the unfolding scientific revolution in Uganda and strongly pledged to support the scientists to get Uganda in particular and Africa in general out of dependency and to modernize society.

“I salute as a witness, the contribution of Makerere University to the unfolding scientific revolution in Uganda, he said.

The President was virtually addressing the 72nd graduation ceremony seeking an apology from the audience for not attending in person and explaining that the security detail would spoil the celebratory mood of the graduands.

President Museveni also congratulated the University upon reaching 100 years of existence pointing out that the institution is very important in the history of Uganda and the society.

The President gave a brief narrative of the genesis of the Ivory Tower dating back to the time of the early explorers and missionaries who came to the country in 1877 the CMS and the Roman Catholics in 1879 importing their confusion and rivalry to Uganda that caused much suffering.

He however noted that despite these shortcomings, the missionaries started new learning in schools like Buddo, Kisubi and Namagunga among others that culminated to the establishment of the Makerere University in 1921.

He noted that though founded by colonialists to satisfy their interests, over time, Ugandans benefitted from the institution especially in modern education such as science medicine that saw the first products like the late Dr. Samson Kisekka graduate in the discipline.

We have gained a lot from Makerere University especially in the field of science, the President noted.

He cited doctors now working on vaccines but discouraged the idea of collaborative research advising that the University scientists should be independent in their research work.

Our scientists should be independent in research, he said.

The President also cited scientists who are producing automobiles like the electric vehicles, veterinary medicine and also the food scientists like Dr. Muranga and Dr. Kyamuhangire, as well as Dr. Ssebunya and group who revolutionized agriculture by discovering a new type of coffee that yields five times more than the old one.

The President defended the move by government to improve the remuneration of government scientists adding that science is the base of social-economic transformation.

He assured social scientists that they are not forgotten as government cannot do every thing at ago but decided to prioritize scientists as they are the base of social economic transformation.

President Museveni said it was a pleasure for him to push for the funding of Universities in Uganda and also to broaden University education in the country by introducing self-sponsorship as opposed to the admission of only 2,000 government students leaving out 9,000 qualifies candidates.

President Museveni pledged to address challenges faced by the University like the building of the fence that will be worked on.

The First Lady and Minister of Education and Sports Mrs. Janet Museveni urged grandaunds to be patriotic and diligently work to address the aspirations of the nation articulated in the current national development plan and many yet to come for the transformation of our communities and prosperity.

She congratulated grandaunts for celebrating an achievement attained through resilience, perseverance, dedicated hard work and immeasurable sacrifices of their parents guardians and benefactors.

She also congratulated the leadership of Makerere University and staff for seeing the grandaunts through their academic journey.

The First Lady further thanked parents, grandaunts and sponsors for their sacrifice.

Mrs. Janet Museveni commended the NRM government for ensuring that Ugandans attain education from the lowest level to University through the enabling programs like the UPE and USE among others.