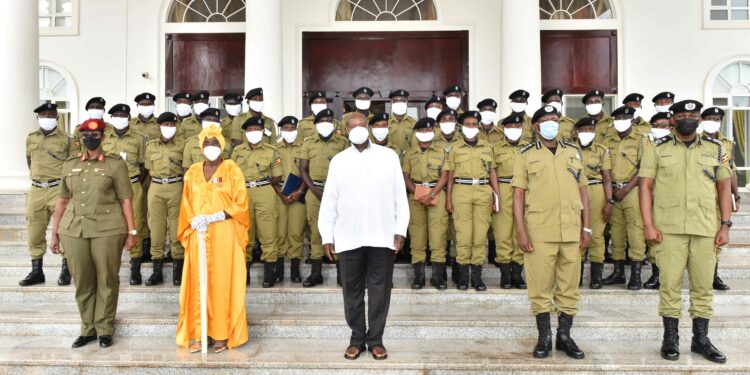 STATE HOUSE, ENTEBBE: President Yoweri Museveni has counselled young political and public servants that they must know the story of what the people lack and need for social economic transformation and prosperity.

“Talk the language of honesty. I don’t want to produce my wealth and then somebody steals it, robes or embezzles the money if working on my farm. In order to defend prosperity of your people you must know this package. For people to be alright this formular must not be interfered with by ideological confusion or political confusion of crime. To kill me because you want to steal what I have sweated for! he said.

President Yoweri Museveni said the development of science and technological is the primer for social economic development for Uganda.

“If you look at gun, the bullet…it has got three parts; once you fire – projectile, the cartridge propellant, there is a detonator and a needle that pricks bottom of bullet to fly. That pin is called a primer – the initiator of whole process. The beginner! The primer of social change is development of science and technology and that is what has made societies change. Once these changes happen, they affect the way people produce wealth and live. That is how NRM comes in and says we have lagged behind for a long time! We need prosperity and also security,” he said.

“In order to support prosperity, you discover that there is complementarity. Tribes cannot easily complement one another. Most of the time, the buyers of what they produce are from another tribe. In the 1950s while growing up, the people who bought our products in Ntungamo were Walusimbi Mpanga and Bukenya in who bought our cows in bulk. Also a white man in Ishaka buying cows and taking them to Kilembe mines and enabled me to go to school. The people who bought our cows were not banyankole, the ones who helped get money to pay school fees are the Baganda and the white man. If talk of prosperity, confront those who promote tribes. That creates a problem for the people who push sectarianism,” he said.

President Museveni warned against what he described as obscurantism, by people who claim tribe is important, blood is thicker than water. “This is an obscurantist line for our prosperity. We should not talk about tribes. Down with sectarianism, long live patriotism,” he said, instead emphasizing the principles of patriotism, Pan Africanism, Social Economic Transformation and Democracy

“Patriotism, love Uganda! Even if you love Uganda, Uganda may not be enough to support our prosperity. Once people wake up and produce goods and services on big scale, the internal market will not be enough. When people started producing like sugar cane, we had 380,000 tones now Uganda produces 700,000 tones with a surplus of 380,000 tones. Problem is where do we sell this sugar?

But patriotism not enough and eternal market not enough! That is why as NRM we say think about Africa! Think about Pan-Africanism which will give you a bigger market. Either we do this or stagnate,” he said.

The President urged leaders to sensitize the people to go from old science to modern new science through formal and informal and also doing business in new ways not only working for the stomach but for the pocket as well.

The President said the police must deal with crime and the vanguard are the CID who must detect and get the uniform people to arrest.

“When we were fighting Amin, we had no supervisor. We were young people like you. We would go to Tanzania and Nyerere would give me assignments. We came through borders, come here do work and go back. Why were we doing this risky work but doing it devotedly? It was because of this conviction. No way our people can be alright if we don’t do these things. Apart from the law, you need policeman with a mind! In your own mind, you need to be convinced that this is very crucial for you and your sisters and brothers that you defend this line and not tolerate anybody to do these things. But if you are just there flat – lukewarm, ndimukozi wa government without conviction ..you are a mokozi of nothing. Just parasite! It is my duty to pass you out and commission you. Go and start working. Don’t let your country down,” he said.

“I am ready to do my work as a patriotic Ugandan and criminal investigator,” she said.

“This is not just for us but for our country. When you do good for your country, it trickles down to the grassroots,” she said.