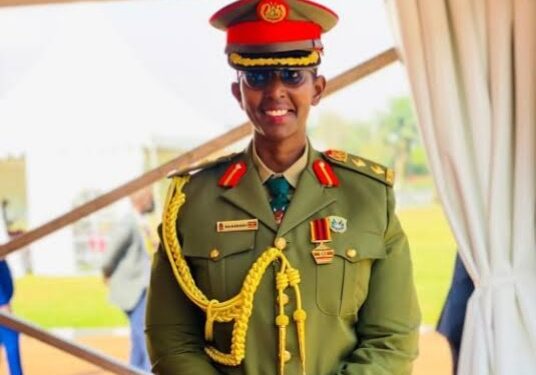 On Tuesday, the Commander in Chief of the armed forces, Gen Yoweri Museveni made promotions and appointments in the army.

Among the few serving soldiers that were promoted is the representative of Uganda Peoples Defense Force (UPDF) in parliament Charity Bainababo who was promoted from Colonel to Brigadier General. She was also appointed as Deputy Commander of Special Forces Command (SFC).

Brig Bainababo is among the few soldiers that have risen so fast in the ranks, for example, last year, in April, she was promoted from the rank of Lieutenant Colonel to the rank of Colonel, and one year later, she was again elevated to the next rank of Brigadier.

Who is Brig Gen Bainababo?

Bainababo began her education journey at Kako Primary School and went to St Charles Lwanga for Ordinary level and Progressive Secondary School for Advanced level. Joined Nkumba University and graduated with a bachelor’s degree in marketing.

She began her military career in 1998 after undergoing basic training at Kabamba military school. She was in the same intake with the first son Gen Muhoozi Kainerugaba. From 1999 to 2000 she attended Cadet training. From there she attended Senior Command and Staff College Kimaka.

On her new duty, she will be leading a battalion of 300-1000 soldiers. She has also served as the Aide-de-Comp and head of security of the First Lady who doubles as Minister of Education and Sports Janet Kataha Museveni. She also served as Police Presidential Guard (PPG) command which is a branch of SFC.