Minister Nabakooba inspecting one of the destroyed houses in Kitende

Lands, housing and urban development minister Judith Nabakooba has stepped in on contested land in Kitende-Kagga and Buloba, both in Wakiso district, looming land wrangles and issued directives to guide the fact finding process.

Nabakooba who made visits in the two areas on February 5 was overwhelmed by the lack of rule of law by the landlords who use private security guards to exert excessive force on the bibanja owners while evicting them.

At her first stop over in Buloba, Chairman Kamada accused one Kato Ssekabanja for metering violence on the people all in the name of obtaining ownership on what rightfully belongs to him.

He said that in the area, respect for bibanja holders by landlords was not in place and so far two landlords have claimed ownership of the contested land.

“If you are a land owner, it doesn’t mean you evict bibanja holders. I told him to bring the land title so we can know the rightful owners but he failed. Selling without proof of ownership is not good, I told him as the leader here to bring the title he claimed to have on the said land.”

She said locals were claiming there are fellows wielding guns and she convened a big meeting to get to the root of the matter.

“The issue here is small, the bibanja owners here are not 20 like claimed, if they are many, they are not more than six. I ask Mr Ssekabanja to sort this issue out easily with the local leaders rather than disturbing the minister over something really small.”

In her remarks, the minister assured the locals that her team had got the right block number and plot, and they are set to look up the true ownership of this land. 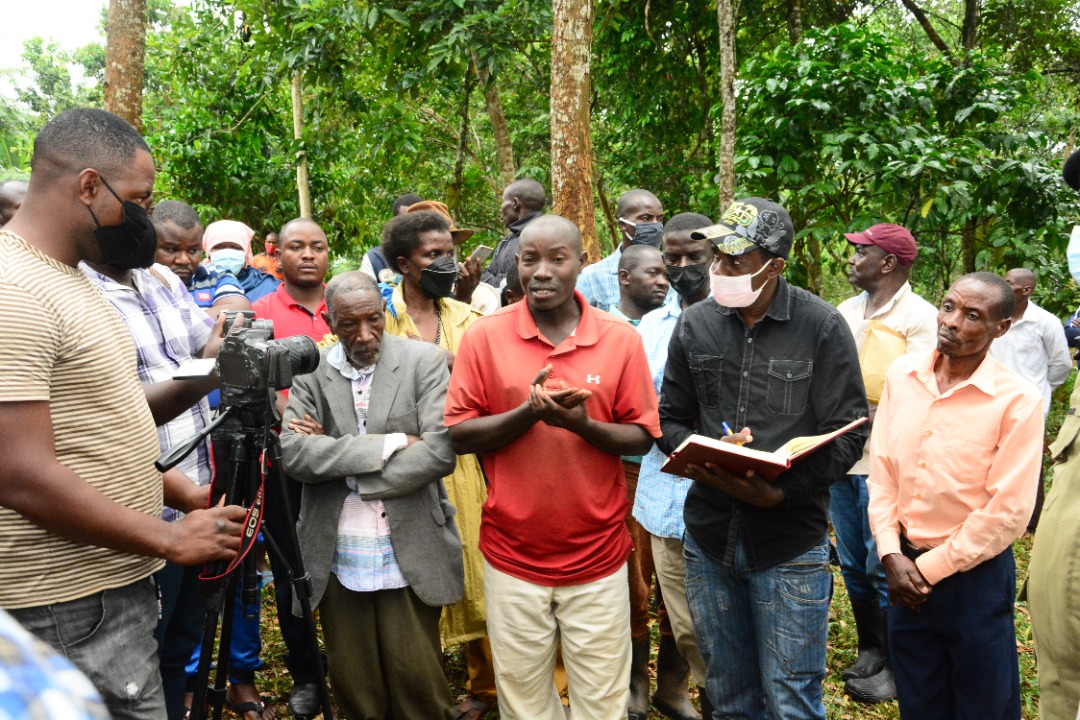 She directed the RDC to work with her officers and do mediation between Mr Ssekabanja and the bibanja owners after getting the rightful owners but urged them to ensure the bibanja holders are those in the categories stipulated by the law.

“Mr Ssekabanja, stop evicting people in a harsh manner, get through the proper criteria and pass through the District Security Committee so that we are on the same page. This is a small issue. We are going to put a commissioner’s caveat on this land so we can do the fact finding. RDC and DPC handle the people who have been jailed over this land.”

At Kitende-Kagga, locals led by Fred Kabajjo shared with the minister how a one Robert Mulindwa is terrorising them off their 13 acres of land that he wants to grab to add on the 30 he already obtained in the area.

A sobbing Kabajjo narrated to the minister the violence that was metered on his family that saw him losing his daughter’s life, Mr Mulindwa’s aides destructing his house to ground and traumatising his family for fighting for what rightfully belongs to him.

The four families on the contested land in Kitende-Kagga shared with the minister how Mulindwa took their land and failed to pay them but kept on terrorising the area with gun wielding private security operatives that destroy people’s farms and homes.

Nabakooba immediately ordered for the arrest of private security on the land and asked security to drop them at Kajjansi Police promising that all files pertaining to the case are going to be expedited and all those that were involved in this metering of violence arrested and prosecuted.

She said she is going to reopen boundaries to know the rightful ownership and directed the DPC to have private security off contested land saying if there is any insecurity in the area, let the DPC use a neutral force which is the Uganda Police Force.

“What is here is saddening, the president keeps telling his people to work hard and fight poverty but someone building something in years and it is put down in one day is heart-breaking. I am going to take this matter seriously to see that I speak to the IGP because they have complained a lot about the police. I am going to write to him and tell him about the conduct of his men.”

She added: “Police is messing up all this because it has interests. We don’t believe in this as a government. We want equity and fairness in the people we serve. We are going to call for a meeting with Mr Robert Mulindwa, Amooti Magara and the Chairperson Paul Nampagi.”

Nabakooba assured the locals that justice was to prevail and if there are titles created when the owners are not in the know, then their cancellation process will take course.

“Next week, my team is coming on ground to establish the 30 acres of the other gentle man but also the 13 acres where people are. Right now people don’t know who falls where. We are going to investigate the matter and be in position to come up with recommendations. I am going to instruct the RDC to come on ground to handle this matter amicably because it is not a complicated matter.”