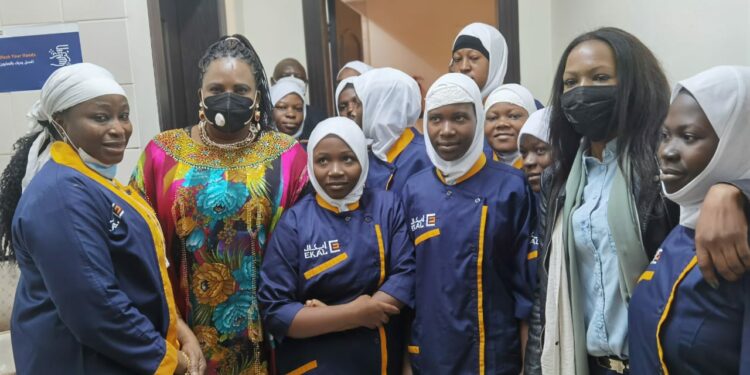 The Minister for Gender, Labour and Social Development, Hon. Amongi Betty Ongom, is in Saudi Arabia to meet companies authorized to deploy Ugandan migrant workers in the country.

The visit running from January 23 to 28, 2022, aims at having a candid discussion with the companies on the safety of Ugandans following the recent complaints.

The chain of deployment of any Ugandan in the Middle East involves two licensed companies; one in Uganda where the recruitment is done, and another in the country of destination. The company in the destination country does the final deployment of the worker although the actual point of work is established before one leaves Uganda.

The system is regulated by both Governments and follows guidelines stipulated in the Bilateral Labour Agreements.

However, there have been concerns over the continued reporting of cases of harassment and outright human rights violation of some Ugandans placed in jobs across the Middle East, including in Saudi Arabia.

It is for this reason that the Minister led a delegation of officials from Uganda to go hold meetings with the labour companies in Saudi Arabia to agree on strategies for improving on the safety of migrant workers.

The delegation on Tuesday spent the larger part of the day inspecting the EKAL accommodation facilities where Ugandan girls are housed on arrival. They met with the deputy general manager of the facility, Mr. Muhammed Ali Al Melhem and also elated Ugandan girls who were at the facility.

“The Ministry of Gender, Labour and Social Development and the Government takes seriously the complaints concerning the safety of all Ugandans abroad and it’s therefore our resolve to have engagements at all levels until such a time when everyone’s safety is guaranteed.” Hon. Amongi said.

The Minister will tomorrow, Wednesday, meet her counterpart, the Minister in charge of Labour in Saudi Arabia to discuss pertinent issues regarding the rights of workers.

Also on the delegation is the Permanent Secretary Ministry of Gender, Labour and Social Development, Mr. Aggrey David Kibenge.