by Mubiru Ivan
in National, News
2 1 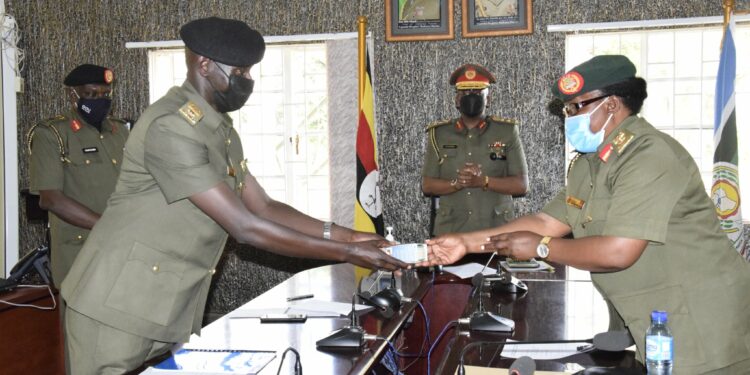 The handover function was presided over by Maj Gen Leopold Kyanda, the UPDF Joint Chief of Staff.

“I have today officially handed over the Office of Defence Spokesperson to my Deputy Lt Col Ronald Kakurungu as I prepare to attend National Defence College. The function was presided over by UPDF JCOS  Maj Gen Leopold Kyanda. I wish Lt Col Kakurungu the very best of luck,”Brig Byekwaso tweeted.

In December last year, it was revealed that President Yoweri Museveni who also serves as the Commander in Chief of the armed forces sent a message to Brig Byekwaso, State House Anti Corruption unit head, Col Edith Nakalema and Brig Peter Chandia, the Acting Commander of Special Forces Command(SFC) informing them that they were going for a one year training course at the National Defence College.

The trio was sent to the training along with several army commanders above the rank of Colonel.

According to Daily Monitor newspaper,  all officers are expected to hand over offices to their deputies before leaving for the course.

Brig Byekwaso confirmed to the local daily that indeed she was going for the course but when asked to confirm whether Brig Chandia and Col Nakalema are also joining her, she said she is yet to get a full list of the officers going for training.

“It is true. I am going for the training,” Brig Byekwaso told Daily Monitor on Sunday.

“I don’t have the necessary information now. So I can’t confirm or deny. Please call Afande Nakalema, she is available,” Ms Nabusaayi said on Sunday.

“Efforts to contact Col Nakalema were futile by press time. Our calls went unanswered. Her personal assistant too did not pick our calls,” Daily Monitor stated.