by Mubiru Ivan
in National, News
41 0 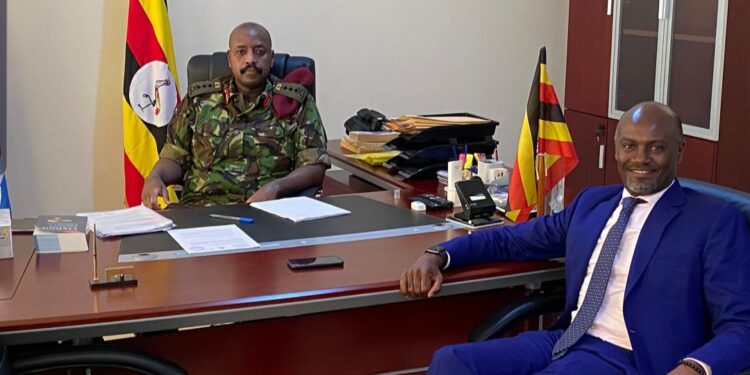 Currently, Mwenda,a veteran journalist  is under fire for putting on UPDF uniform yet he is not a soldier. For days now, opposition activists have been criticizing and pushing for the arrest of the former over his act.

In an online video, Mwenda is seen putting on a military uniform, sitting in the UPDF helicopter, making utterances on the strength of the Ugandan army and threatening to obliterate Allied Democratic Forces (ADF) rebel group.

According to Sec 119 (1) g and h, of the UPDF Act No7/2005, sub sec (g) stipulates that every person, not otherwise subject to military law, who aids or abets a person subject to military law in the commission of a service offence; and (h) every person found in unlawful possession of (i) arms, ammunition or equipment ordinarily being the monopoly of the Defence Forces; or (ii) other classified stores as prescribed, is subject to military law and can be tried in military courts as appropriate. The army has used this article to apprehend National Unity Platform (NUP) supporters who were found wearing red berets.

However, according to Gen Muhoozi, Mwenda’s act is not a big deal.

The senior army officer says Mwenda is part of the massive fan base of UPDF and because of that, they want to wear its uniforms, hold its guns and even pretend to fly its aircrafts.

“My bro Mwenda is part of the massive fan base that UPDF has because of the great work we do. They want to wear our uniforms, hold our guns and even pretend to fly our aircrafts. It means nothing. They are just excited beings. A victorious army like ours is used to such adoration,”Gen Muhoozi tweeted on Sunday.

On Friday, UPDF said it going to probe Mwenda and the circumstances under which he allegedly possessed and wore army stores.

“I want to believe that Andrew(Mwenda) had prior permission. We must take cognizant of the fact that the law allows a civilian to don a military uniform. Article 160 of the UPDF Act talks about circumstances under which a civilian can put on a military uniform. I want the public to know this provision is there,”the army Spokesperson Brig Flavia Byekwaso said.

“Mwenda was moving with the commander of Operation Shuja(Maj Gen Kayanja Muhanga) where he was going. That makes me believe he was given authority to don that uniform and to that extent he didn’t break the law.If he didn’t have permission to put on the uniform, he committed an offence and if proven guilty is liable to not more than seven and not less than three years’ imprisonment.”

STRIVE MASIYIWA: That thing which only you can do well will bring you before kings…