by Watchdog Uganda
in News, Politics
2 0 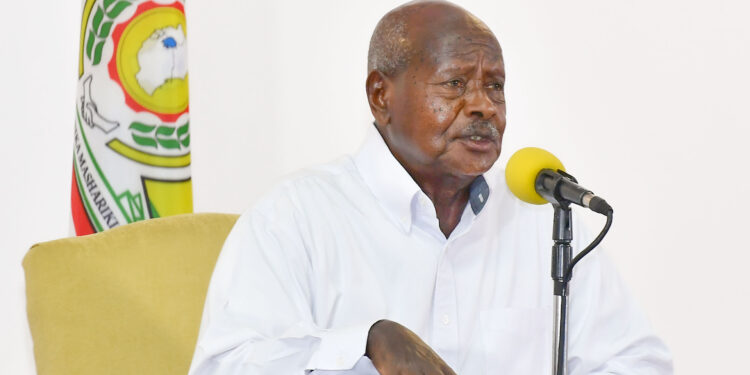 President Yoweri Museveni has attributed the delay to incorporate the Democratic Republic of Congo (DRC) as a member state of the East African Community (EAC) to the distortion by colonial boundaries.

“DRC is part of the region. It’s colonialism that brought problems. Now that Africa got its freedom, we should get out of the distortion. The people we are integrating are part of us,” Museveni said.

The president was today delivering his remarks from State House, Entebbe, to the virtual 18th Extra Ordinary Summit of the Heads of State of the EAC through zoom conferencing that linked all the Presidents and Representatives of member states during the occasion.

“The purpose of Integration is to find how to solve the problem of prosperity by producing goods and services and sell in the integrated market of East Africa-Africa and the world. The joining of DRC in EAC is a very big event, a most welcome one, a natural one. It has been a member of EAC since time immemorial by criteria of borders, practicing free market economy and democracy of political elections if it was not the problem of colonialism. I expressly support Congo to come where it belongs,” the president said.

The Summit considered two main items including the report of the Council of Ministers on the admission of the Democratic Republic of Congo into the EAC and the amendment of the Quorum Rule of the Summit of EAC Heads of State.

The Presidents of Uganda, Kenya, Tanzania and Rwanda attended the virtual summit while Burundi was represented by H.E the Vice President, Prosper Bazombanza, while South Sudan was represented by General Deng Alor Kuol, Minister of East Africa Co-operation Affairs (EACA).

The Chairman of EAC and the President of Kenya, H.E Uhuru Kenyatta thanked the partner member states for responding to his invitation and attending.

“When we come together nothing is truly impossible for us to achieve,” he said.

The Summit was preceded by the 45th Extra-Ordinary Meeting of the EAC Council of Ministers, that took place on Monday, 20th December 2021.