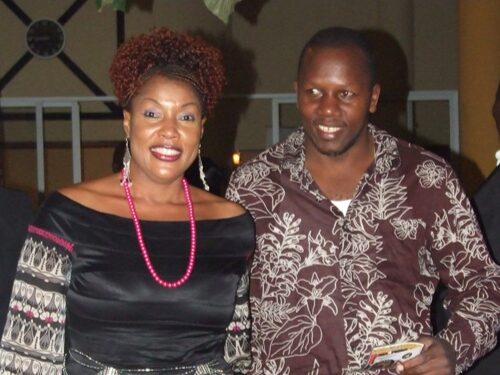 Sarah Kizito, the proprietor of Centenary Park in Kampala and husband Godfrey Nyakana could pay over Shs.1 billion as compensation to a one Ham Mukasa, once court establishes that the duo indeed colluded to defraud the latter.

Mr Mukasa was kicked out of his Le Beaujolais entertainment Club by Ms Kizito under the pretext he had not followed the agreement, before the businesswoman and her enstranged husband, Nyakana, forcefully kicking him out of the business.

In a civil suit 297 filed in the high court of Uganda, on April 28th, 2021, through his lawyers of Kintu Nteza and company advocates, Mr. Mukasa wants to be paid over Shs.1 billion for the losses he suffered in a fraudlent deal in which he was duped by Ms Kizito and her husband.

Mr. Mukasa, a grandson of famous Buganda Chief, Ham Mukasa, was alledgely forced out of a plot of land in Centenary Park that had been leased to him and developed into an entertaining spot, after the defendants discovered that they would be compensated with over Shs.20 billion by government, due to the fact that the Uganda National Roads Authority planned a fly over road that was due to be constructed partly through the property in question.

In one of the complex court cases before the courts, Mr Mukasa wants the defendants, to pay over Shs. 1,073,048,667 as damages.

Asides damages and their interests, he seeks to recover the costs incurred in executing the suit in courts of law.

Nyakana, who was the agent of the first defendant and husband to the second defendant is accused of duping the complainant after approaching him with information that there was a space to sublease at centenary park.

What followed were negotiations between the complainant and the accused, regarding how to secure the said plot in the park so as to begin using it, to carry out different operations.

After that, the parties inspected the available space for subleasing at centenary park, after which it was discovered that there was a two storied unroofed dilapidated structure which needed renovation.

It was then agreed by the defendants, that the entire roof of the dilapidated structure had to be let, in a memorandum of understanding that was signed on January 28th, 2010.

The conflicting parties later signed a memorandum of understanding, whose among other terms was a requirement by the accused to furnish the said dilapidated structure.

“Under the said MOU, the 1st defendant was obliged to complete the interior and exterior of the the subleased premises despite the fact that the plaintiff had already paid Shs. 250,000,000 to the first defendant,” reads the suit.

In the said meeting, the defendants and their agent Nyakana through misrepresentation offered the plaintiff an extension of the sub-lease duration from 10 years to 20 years in consideration of the plaintiff’s completing the interior and exterior of the subleased premises including roofing and ceiling, exhaust ventilation, toilet and door fittings, tilling, total exterior cladding, sound proof windows and security doors interior.

Based on the defendants’ misrepresentations, on the 9th March 2010, the plaintiff and the 1st defendant executed a commercial sub-lease for an initial duration of 10 years, wherein the plaintiff was to complete and operate in a commercial building of plot 5.

The plaintiff further contended in the suit, that since the first defendants management agreement with KCC was for a duration of 10 years from 16th May, it was fradulent to purport to sublease part of her interest to the plaintiff for a period of 20 years from 9th March, 2010.

The plaintiff asserted that the defendants acted fraudulently when they purported to grant the plaintiff a subrelease, whereas they only had a management agreement with KCC.

He further contented that the defendants actions were deliberate and intended to deprive the plaintiff of his funds, under false pretences.

The complainant revealed details of his fraud and misrepresentation allegations in the ongoing court case. He stressed that the defendants posed as registeted proprietors of plots 96A-100A park link which was not the case.

He accused them of purporting to sub-lease plots 5 park link and plots 96A-100A to the defendant for a term of 10 years with an extension of 10 years, yet they had a management contract with KCC for 10 years from 16th May 2006. He also alleged that the defendants gave wrong information about the purported leasee of the said plot of land with KCC.

Ambassador Galiwango presents his credentials to the President of Seychelles