Innovators asked to embrace media to promote their start-ups 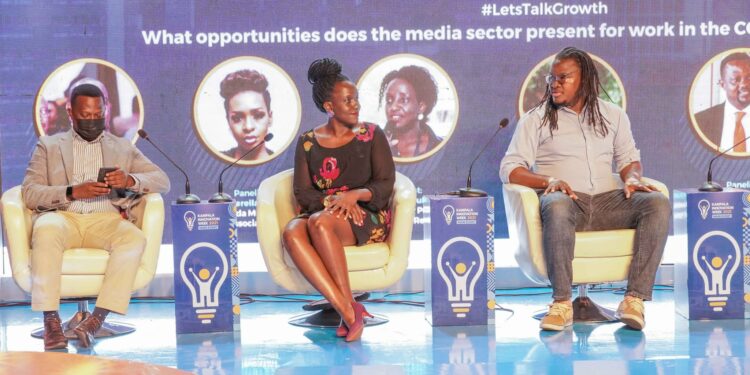 Although creativity and innovations are currently among the strong vehicles facilitating development in countries that are embracing technology, but without innovators’ involvement of media as a channel through such services will reach the end-user it is hard to penetrate both local and international market thus keeping the start-ups in the Shadow.

Speaking during the 3rd edition of Kampala Innovation Week on Tuesday, Rebecca Mukita the Public and international relations Manager at Uganda Communications Commission (UCC) said the pandemic has redefined the role of the media, and it’s such an important platform that will facilitate the growth of businesses by providing important information to the public which is the potential source of the market.

“People normally get new products after media awareness. So as a commission, we have done a lot to see how we can complement our people to thrive. We are also doing some workshops on capacity building so that our innovators or content creators can be able to sell their content not only in Uganda but worldover. We do this by ensuring our people or entrepreneurs especially those in media produce content that meets the international standards.”

Mukita added that innovators must embrace standards because standards guide their innovations and perve way for them to compete with other colleagues on the international market.

Joseph Kigozi, the Chief Strategy Officer at Next Media group also noted that the media’s role is to tell young people the kind of opportunities and to tell them how it must be done or to achieve them.

“The integration of media is now a great opportunity for young innovators if they use it well in correspondence to what they do. Also, since it’s very expensive to produce standard content alone, young people must embrace creating Partnership if they want to benefit from the power of innovation.”

David Ogutu team leader from Kafunda Kreative also called on media especially mainstream to begin embracing local content or help young innovators to enhance their production ability so as to fit their media standards instead of asking them to come with sponsors if they need the content to be used.

“We have now a Ugandan movie on Netflix all those are opportunities for Ugandan filmmakers but there has to be a supporting system. Media houses must fully check on their local content percentages because currently, it’s a news and live-music show. They need also to allow our filmmakers and see how they can help them air out good production.”