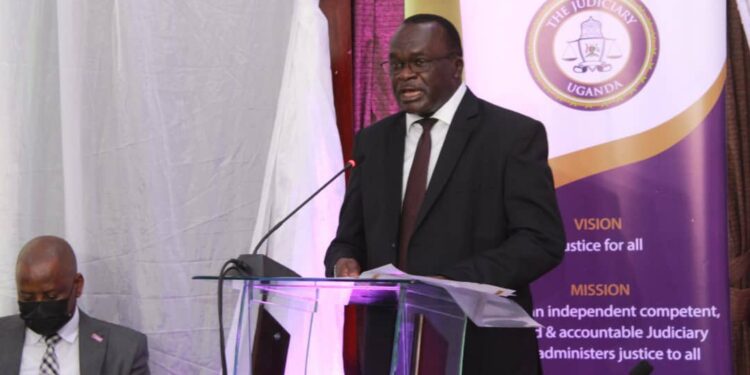 Chief Justice Alfonse Chigamoy Owiny – Dollo has asked government to increase the budget for the Judiciary as well as security for judicial officers.

Justice Dollo made the request while presenting the Judiciary Annual Performance Report for the Financial Year 2020/21 on Monday at the Judiciary Headquarters in Kampala where he said that budgetary limitations have compounded the Judiciary’s perennial challenges with case disposal due to the inadequate number of judicial officers.

“A paradigm shift is needed so that appropriate focus and attention are accorded to the Judiciary as an arm of Government (just like Parliament) considering its Constitutional mandate and the peculiar challenges it faces. This would ensure that it gets the necessary funding that is adequate for effective delivery of judicial services,”Owiny-Dollo said.

He also noted that there is a need for enhancement of human and material resources to tackle the challenge of case backlog, which stands at 32 percent and also more vehicles should be procured for Judicial officers across the Courts especially in hard-to-reach areas, to facilitate locus visits and other adjudication functions of the Courts.

“More vehicles are needed to facilitate locus in-quo visits while marine vessels are also needed for courts on Islands of Koome, Buvuma and Kalangala.”

The Chief Justice explained that due to inadequate funding and staffing of the Judiciary there is an escalating spike of case backlog at all Court levels. The backlog level as of 30th June 2021 stood at 51,748.

Justice Dollo noted that the issue of case backlog is one of the perennial challenges the Judiciary has faced due to limited judicial officials because of the limited budget, yet as long as some cases are not worked on, some projects are affected.

Currently, in the Commercial Court alone, over Shs 5 trillion was locked up in the 6,094 unresolved cases. The volume of pending land cases as of 30th June 2021, stood at 32,413 and they are broken down as follow: 15,966 at the High Court, 10,944 at the Chief Magistrates Court 5,419 at the Magistrate Grade One Court. This means that a vast amount of land and resources are locked up and not contributing to the economic development of the country.

He also called for security increase for judicial officers since security threats have been a long-standing challenge for the Judiciary.

“Some judicial officers have received personal threats relating to their management of cases while at the same time some cases of vandalization of Court infrastructure have been reported in some areas.”

The supplementary budget was earmarked for retirement benefits of judicial officers in accordance with the Administration of the Judiciary Act, 2020, the domestic and utility arrears and the disposal of Presidential and Parliamentary Election Petitions. Out of the released budget of Shs 215,502,421,726, Shs 208,780,683,306 was duly utilized, indicating an absorption rate of 96.6 percent.

ROSE NAMAYANJA: Government to ensure UPE, USE are free and of quality