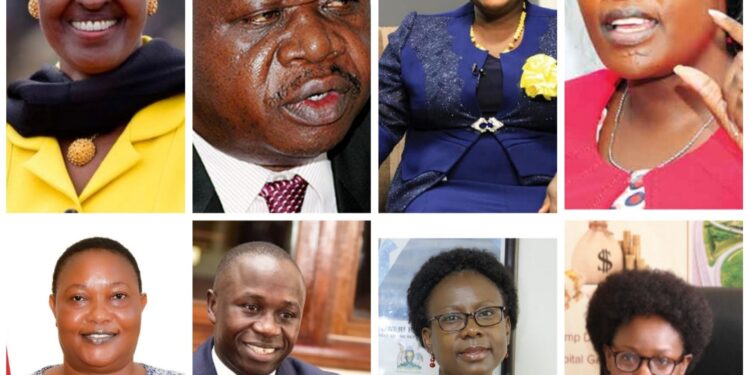 President Yoweri Kaguta Museveni named his Cabinet on the 8 of June this year ending months of speculation that had gripped cabinet hopefuls after the dissolution of the previous one-two months earlier.

About the new cabinet, it’s safe to describe it as one that no one saw coming, with key cabinet position occupants like Dr. Ruhakana Rugunda, Sam Kahamba Kuteesa, Esther Mbayo, Ephraim Kamuntu discarded, while surprise names such as Premier Robinah Nabbanja, VP Jessica Alupo, Babalanda at the Presidency, Kiwanuka Kiryowa as Attorney General, all cutting.

Responding to the public shock at the appointments weeks later, President described his picks as ” fishermen” a term that could have largely been intended to point at a change in methods of work by the new government in favor of a more common man-centered policy.

Five months down the road, we try to assess who in the new cabinet has been able to rock as per the appointing authority’s, and the general public’s expectations.

Besides throwing money at parties the Nigerian Oga style, and making veteran Minister Hilary Onek a cry baby, the Kakumiro Woman MP has had innumerable positives to her name so far.

For those that watched her thwart a multi-million theft of taxpayer’s money in a fraudulent procurement deal in Kasese, it was certain that those under her over sight were to prepare for an overdrive.

In response to the backlash that came after from the mafias suspected to be behind the fraud, Nabbanja insisted she was not scared of them and indeed, her actions have so far reaffirmed that stance. From riding on boda bodas to sailing on canoes to access hard to reach areas in supervising government projects, the frustrations of the Oneks under her command is understandable.

Yet, also noteworthy is that the president seem to be contented with the work methods of the Saabaminista whom he publicly hailed amid protests from critics.

We may not get a Rugunda, Mbabazi, or Apollo Nsibambi but in Nabbanja, you truly have a “fisherman Prime Minister” and its okay, at least for now.

Before her appointment to head Museveni’s Office of the NRM National Chairman(ONC) at Kyambogo in 2016, very little was known about the Senior Presidential Advisor on Political Affairs Milly Babalanda.

As the administrative head at Kyambogo, Babalanda made a name, reorganizing the entity into one of the most efficient establishments for the coordination of the President’s political activities. Her appointment as Presidency Minister thusc ame as a no surprise, mainly to those privy to her organisational, mobilisational and strategic planning capabilities.

To the public however, questions over her competency to handle a very demanding docket like the presidency still hovered.

So far so good, she has surpassed the expectations and on her way to force naysayers into submission. She has transformed the Resident District Commissioner (RDC) institution to make it the basic unit for the implementation and supervision of government programs. Right from the inception of her term in July, she promised an open door policy where the public would actively participate in making thing happen at the presidency. As such, she provided a toll free line at her office through which the public interacts with the Office of the President to pass on valuable information regarding service delivery, corruption and security.

RDCs are tasked to submit weekly reports on their field activities. This way, the Presidency which is charged with the country’s security usable to gather nationwide intelligence in almost real time. Monitoring of government projects has also been made easy.

All the above, not withstanding the fight against graft at the Uganda Printing and Publishing Cororation(UPPC) where the recovery of billions of taxpayers’ money is on course to be fulfilled, can clearly tell what Babalanda has been so far- a real fisherman cabinet member.

For those who had written off the office of the VP as one for the docile, Alupo has proved them all wrong, and a lot more seems to be on the way.

Barely six months into her tenure as Museveni’s deputy, Alupo has been almost everywhere to prove doubters wrong.

With her at the center of the negotiations between Prime Minister Robinah Musafiri Nabbanja and Disaster Preparedness Minister Hilary Onek a fortnight ago at the peak of the duo’s power conflict, Alupo didn’t only demonstrate she was comfortably deputizing the number one but also exhibited the trust and confidence Museveni has in her.

With over four years left onto this term, one can only imagine how far the refined ex service woman will go.

Those who might habe doubted Ogwang at the time of announcing him in the new cabinet should be having goosebumps already. For the past couple of weeks, and perhaps now, Ogwang has been the key talk of town and country villages.

Beginning from Bunyoro, to Busoga, Bugisu and so on, the Ogwang storm has steered panic to wherever he has been.

A field tour of the the country monitoring government project by those at the top could not have been more timely.

Huge inefficiencies exposed, corruption and graft scandals unearthed and scores arrested and detained for lacking respect for taxpayers’ quid, Ogwang has established himself as an a key squad member in Museveni’s anti corruption line up.

No wonder he works under the supervision of the anti graft obsessed Presidency Minister Milly Babalanda who has already declared a field based approach at the presidency.

The former Mityana Woman MP might have largely been in the news with regards to the pending by election in Mityana but there is a lot more to read and tell about her.

A former police publicist, Nabakooba has over the years built a reputation as one of the key reformists in the current government.Her tireless efforts in defending the land rights of the poor Bibanja holders back in Mityana throughout the last term convinced Museveni to move her from the previous docket (ICT and National Guidance) to the lands Ministry.

No wonder, at this year’s heroes day celebration at Kololo, the head of state bemoaned her loss in Mityana while recognising her efforts on land justice and that he had no doubt she would blossom.

Besides the numerous reforms at the lands ministry where hundreds of titles acquired fraudulently have been de-registered, Nabakooba has intervened in a number of land wrangles to deter the powerful from disposessing the weak.

In Buikwe, the fraud that threatened thousands of residents was stopped in August and land officials arrested for their role in facilitating the rich’s machinations against the poor.

She is also at the center of a mass land grabbing investigation in Kayunga, besides the giant “Bararo” land eviction project in Amuru.

So far so good , Nabakooba has lived to the real expectations of her boss as a true “Fisherman Minister.”

You may he having the Muhammad Nsereko dressing code troll against the decorated NRA General a fortnight ago inside parliament at the back of your mind but wait, there is a lot more to that.

General Otafiire, who staged a fight of his life to return to parliament after five years on the sideline remains the man at the Ministry of Internal Affairs.

At the height of the tensions following the double bomb attacks about three weeks ago in Kampala and Mpigi, the Minister deserves credit for the eventual return of calm in the country.

Working in conjunction with sister security agencies, Uganda police has largely succeeded in blowing the cover of the terrorists behind the attacks with a number of arrests made so far. Internal Affairs also deserves an applause for the good fight against the Bijambiya assailants of Greater Masaka who had gone on a killing spree of the innocent elderly between July and August.

Not too much has been said about  Dr. Aceng this year but the fact remains she continues to be a cornerstone minister.

At the peak of the coronavirus pandemic last year, she is remembered for spearheading the fight to scale down the negative impact of the pandemic upon the nationals.

With the return of the virus more energized in the second phase in May this year, experts had smeared the public with panic with their prophesies that a third phase was just around the corner and was expected to be more catastrophic than both the first and the second one. The send lockdown announced by the President and supervised by the Health Ministry was a measure that attracted desperate cries from desperate people. Months down the road, efforts seem to be paying off. With the lockdown considerably lifted, the economy working at nearly 90 percent, saying Aceng has outperformed her critics would be an understatement.

Aceng also deserves credit for the acquisition of COVID19 vaccines, a thing that had remained a key challenge in the fight against the pandemic. As per President Museveni’s most recent address, Uganda will have received more than 23 million doses of the vaccine to pave way for the inoculation of more than ten million people. Unsurprisingly, the date for the full reopening of the economy has already been announced. A true fisherman minister. Indeed.

The debate on whether Mrs Museveni deserves to feature on this list is indeed a contentious one but only before you look at things in the perspective below.

It’s safe to argue that the education sector has been the most affected one since the outbreak of the pandemic. With schools closed for nearly two years, finding a lasting solution would naturally not be an easy task. Vaccination which had been hoped to form the basis of the reopening of the sector turned out to be a shortfall when experts failed to approve it for those below 18 years.

Under the challenges posed, some interventions have been made to facilitate other non traditional means of education such as through radios, TVs, and newspapers while universities and tertiary institutions have been encouraged to embrace online lessons.

As we talk now, universities have already resumed classes, while both Secondary and Primary sectors are set to open in January. But ahead of the planned resumption, a lot of challenges stand ahead and the Minister and her team must be having sleepless nights.