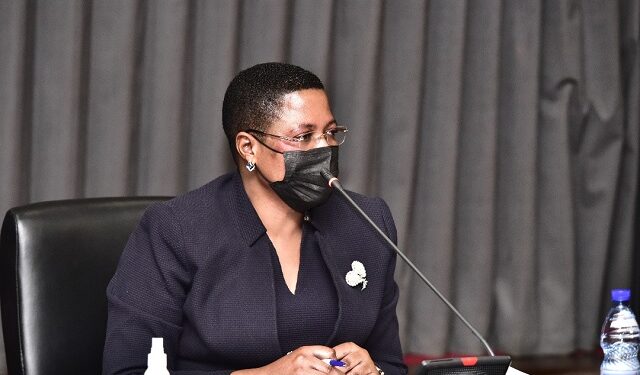 Ugandans have been encouraged to exercise increased vigilance in their communities owing to the on-going threats to security in the country.

While addressing the House sitting on Tuesday, 09 November 2021, Anita Among called for more information saying “it is not an easy time but we have to take care”.

“As I was coming to the House, I saw a bus on social media that was blown up around Mpigi. We need to be very careful in places we go to, people we interact with and we also need to tell the people out there to be careful,” said Among.

“Once the fire has been taken out, we shall verify to know the cause, whether it was something related to the current threat of terrorism,” he said.

The Deputy Speaker also urged Ugandans to promote community policing and report suspicious activities and individuals in their communities so as to maintain a high level of security.

Kumi Municipality MP, Hon Silas Aogon reiterated the call for adequate information from the Minister for Security on the bus fire and other related incidents that have happened in the country.

“We demand for information from the relevant ministry because this concerns issues of safety not only of the Members but the entire public as well,” Aogon said.

Hon Abdallah Kiwanuka (NUP, Mukono County North) said there is urgent need to look into situations that could lead to insecurity in Uganda and set up measures to mitigate them.

In a related development, Nakawa Division East MP, Hon Ronald Balimwezo said that the security forces are not going an extra mile to curb some activities that are threatening security in Nakawa.

He said that Nakawa residents living in Mutungo Zones II and III were attacked by a criminal gang with iron bars and machetes on 29 October 2021, injuring 23 people and another 18 in Kasokoso on Tuesday, 02 November 2021.

“In such circumstances, we expect Police to secure the people and their property but they were not available. Nakawa Division was given 900 LDUs but there are reports that 400 of them are being sold to private companies,” said Balimwezo.

He tasked the Minister for Internal Affairs to elaborate on the efforts being put in place to combat the criminal gangs as well as arrangements to secure the residents of Nakawa and Ugandans at large.

Muhoozi committed to verify the concerns raised by Balimwezo and return to the House with a more concrete report.

Hon Sarah Najjuma (NRM, Nakaseke District) raised concerns of existing explosive devices which she says were abandoned during the 1980 liberation war. She urged the Internal Affairs Minister to give a report on the matter and way forward.

“A bomb blast that took place in Nakaseke district on 29 October 2021 killed three children in Ssegalye village, Ssemuto sub-county. We have been losing lives due to these explosive devices that were abandoned during the guerrilla war” she said.

She also called on Government compensate the affected families.