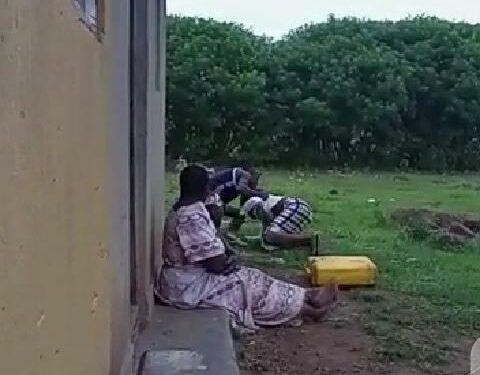 Police in Kamuli has finally apprehended the heinous young man captured on camera while beating his wife and kid like thieves.

The suspect has been identified as Galubaale Tom, a resident of Buwaiswa, Kamuli Municipality in Kamuli district.

The suspect was apprehended on Tuesday morning from Kamuli following the torture video which has since gone viral on social media.

It’s reported that Galubaale was angered after his wife (names withheld) dared to check through his phone, a move that pissed him off.

The suspect followed the victim, along with their two and a half year old kid, to her mother in law where she had gone to report her husband about suspected infidelity witnessed in the phone.

In the video, Galubaale is heard accusing his wife of always listening to rumours, something that has caused fights at their home.

After a short argument, Galubaale is seen jumping into the skies before landing onto the poor woman with blows raining like water.

But upon the woman’s escape, the suspect releases the anger remaining with him onto a toddler said to be their offspring. The kids falls down, hitting the head front ways.