by Stephen Kalema
in News
7 0 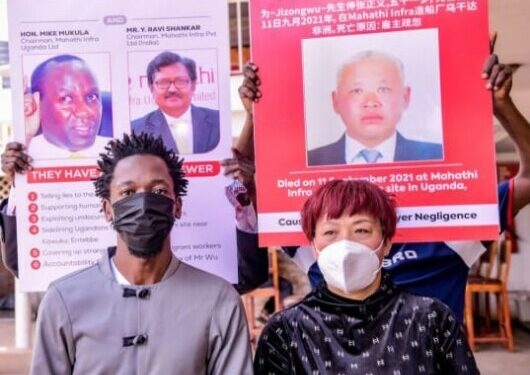 According to Ms Jie, her husband Mr Wu was an ordinary wood-cutting machine mechanic in Jilin Province, China until 19 March 2020 when he was trafficked by yet-to-be-identified companies into Uganda disguising as a tourist visiting Uganda for one month.

However, on arriving in Uganda, Mr Wu was received by Mahathi Infra Uganda Limited, a company that subjected him to all manner of violations, including confiscation of his passport, overstaying his visa, forced and illegal employment, and finally died due to the company’s outrageous negligence.

Mr Wu died on September 11, 2021, and according to the medical reports he had initially been suspected of having contracted a disease that would have alarmed Ugandans (gangrene) but according to Ms Jie’s lawyer Isaac Ssemakadde, the physicians at IHK eventually ruled it out. Therefore the reason for his illness was concealed and he was neglected because the company did not want to publicize his condition knowing its consequences on the health of Ugandans.

As a way of seeking justice for her dear husband using Centre for Legal Aid led by city lawyer Ssemakadde, Ms Jie contends that her husband met his death due to alleged negligence and exploitation from his employers, among whom is Mike Mukula, the NRM vice Chairman for Eastern Region.

Speaking to journalists on Wednesday at Club Obligato, Ssemakadde said that investigations indicate that the people who trafficked Wu into the country are highly connected to a few rogue elements in the government and officials at the law organization believe the Chinese man feared these well-connected individuals and became “submissive to the Mahathi’s oppression to the point of death! He also asserts that Mahathi Infra brought Wu to work in Uganda without a permit.

“A naive simple machine fixer and a man never trained for hazardous work on a shipyard, Ji Zong Wu was forced to do welding and metal-grinding work in a crowded and poorly ventilated environment for many hours a day for almost 18 months with no labour contract, no rights, meagre pay, no health insurance, no work permit, no alien registration card, delayed pay and no sick leaves.”

He added that Mahathi’s deliberate actions such as delaying treatment of Zong, denying him optimum and adequate treatment, failure to repatriate him to China where he could get optimum treatment and care, concealing his sickness from his family until only 84 hours before his death perfectly syncs with allegations that some foreign construction companies in Uganda are deeply involved in human sacrifice for the success of their projects.

“The employees operate in horrendous conditions. The company does not comply with labour laws, and local content rules and regulations. They bring in foreign labour without work permits and they detain their passports without informing their families. We urge the government to quickly investigate this matter and bring the culprits of this barbaric act to book as soon as possible. We also call upon the government of China to step in and fight for the justice of their citizen, Mr Ji,” he said.

Apart from the justice of her husband, Ms Jie also demands compensation of One million dollars from Mahathi Infra for their negligence, alleged human sacrifice and trafficking which led to the death of his husband.

“The plaintiff brings this suit for declarations, a claim for USD 1,000,000 (United States Dollars One Million Only) In special, general, aggravated and punitive damages, as well as interest and costs of the suit,” reads in part the sue notice served.