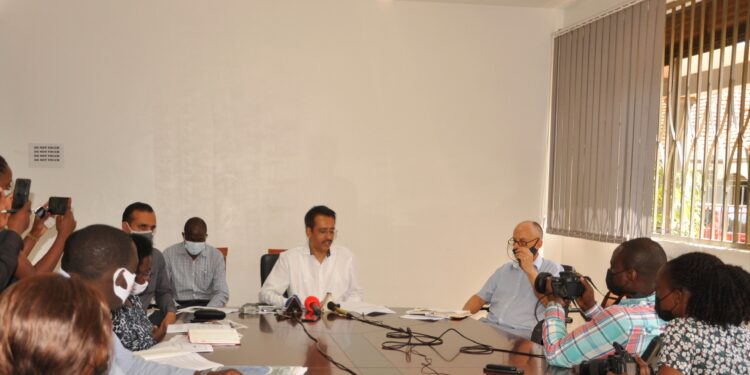 Last week when Fish exporters met with the Parliament’s Committee on Agriculture, Animal Industry and Fisheries to present their view on the Fisheries and Aquaculture Bill, they made a proposal to save the fish species from depletion. In the same meeting, UFPEA Chairman Sujal Goswami was quoted by the media calling for the banning of local eating of Nile perch but his comment sparked mixed reactions from the public.

However, speaking to the media in Kampala on Wednesday, UFPEA CEO Ovia Matovu Katiti said their chairman Mr. Sujal just made a suggestion but the media misquoted him thus causing a public uproar.

Ms Katiti noted that Mr Sujal was giving a suggestion since Uganda loses a lot of fish in unregulated routes.

“As an industry, we need to clarify and reiterate that the statement which caused uproar in the media particularly social media was not among the points submitted to the committee for consideration. It was just a matter of suggestion out of the meeting which was not well-reported and the meaning was misconstrued.”

She added that if Uganda is to safeguard the fishing industry for economic development and employment, their suggestion needed to be looked into and channelled through the industry, promote and protect Nile Perch which is a local delicacy for the increased populace whose demand for nutrition and food security is increasing.

Ms Katiti however wondered why the media failed to focus on the 9 points corrections they presented before the committee and jumped on something very small which they did not even understand well.

Among the points they presented include; Fisheries and Aquaculture Technical Committee (FATC) to play the oversight role in the Monitoring Control and Surveillance (MCS) unit.

Ensuring proper handling of fish at landing sites for food safety of both local and international consumers. Since the issue of food safety and quality is very key in terms of guaranteeing the continuous access and consolidation of key markets and ensuring the safety of all consumers in the regional and local markets.

“Regulate the sector well mainly at the landing sites by stopping illegal unregulated activities characterized by the open gutting of fish which causes losses to the government. This vice has left genuine local traders out of businesses and encouraged unlicensed traders who operate without any documents and no tracing where they sell the fish and fish maws. We proposed that all players along the value chain be regulated and registered by the government,”Ms Katiti stated.

She further disclosed that Ugandans must know that the Fish export industry under UFPEA only exports about 30 percent of the total fish caught from country’s major lakes leaving 70 percent for local consumption.

UFPEA founded in 1992 is an organization that brings together all industrial fish processors in Uganda.