Residents carrying placards denouncing road works on the tarmac road in Buyende town council, made scenes on Saturday morning, calling for Nabbanja to arrest the contractor and UNRA bosses responsible for the shoddy works on the road promised by President Museveni.

by Mourice Muhoozi
in Business, News
12 0 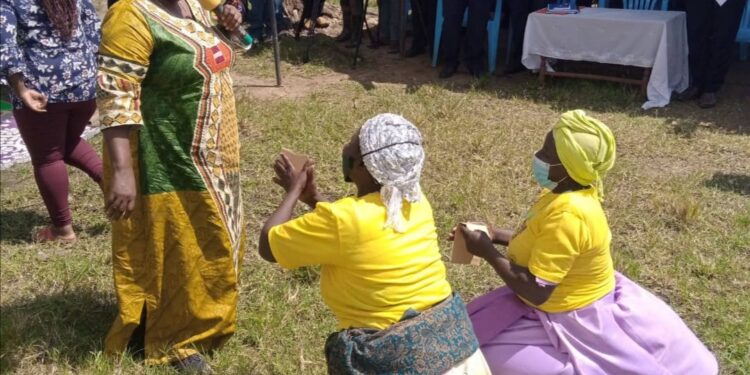 Prime Minister Robinah Nabbanja has been greeted with protests over shoddy road works in Buyende as she embarks on her tour of duty in Busoga.

Nabbanja started her tour of Busoga on Saturday but a controversial 2.8km road in a far end District of Buyende on the shores of Lake Kyoga, has denied her a heroic welcome in Busoga as has been the case with other places she has visited.

Residents carrying placards denouncing road works on the tarmac road in Buyende town council, made scenes on Saturday morning, calling for Nabbanja to arrest the contractor and UNRA bosses responsible for the shoddy works on the road promised by President Museveni.

This website reported earlier on Saturday that residents in Buyende district were up in arms, and accused Uganda National Roads Authority (UNRA) of looking away as a contractor did shoddy works for a 2.8km road construction in the town council.

The contract, according to a residents’ petition, was wrongly awarded to Ms Rukonge Enterprises Limited, at a tune of more than ugx2.8 billion.

However, Mr Stephen Kirenga, an official from UNRA distanced the roads agency from the Buyende road contract, saying, the district local government was entirely in charge of the process.

However, the petitioners say, the contractor left out district and town council local government because he was supervised by the Ministry of Works, who awarded him the contractor without going through district procurement processes.

Now, residents say, the road which has been submitted is of poor quality and want Premier Robinah Nabbanja to bring to book the contractor and UNRA officials overseeing the road. They also want to contract immediately terminated.

The contract in question was supposed to cover Mugweri, Malikowa, Council lane, and Mayendo, and money was fully disbursed from the Ministry of Finance to facilitate the construction.

However, roads officials are on spot for collusion and intrigue, failing to exercise their mandate as per article 166 (d) of the 1995 Uganda constitution.

In a petition written by locals led by Mr. Sharif Mangaraine, addressed to the prime minister, the contractor should be stopped.

They also want officials involved in this scam investigated, as well as refund taxpayers’ money for failure to execute the contract as agreed upon.

“The petition is highlighting a lot of irregularities and anomalies which were based on substantive shoddy construction work, concealing of information due to conflict of interest by Ms Rukonge Enterprises Limited, syndicate corruption and mismanagement of public funds, leading to shoddy work by the said contractor,” read the letter.

The petition was attached with photographs taken of the said faulty construction, and a memory card containing videos as evidence of the substandard work being done.

The petition has been filed at a time when the prime minister is due to arrive in the said district to visit government projects.

Residents claim that the contractor did not follow the minimum required measurements as per the Bill of Qualities (BOQ’s), and the contract agreement was signed.

Residents also noted in the petition that the said contractor did not coordinate with important stakeholders at the town council level and the district local government.

“The contractor deliberately refused to cooperate with the key stakeholders both at Buyende town council and Buyende district local government,” read the petition.

Nevertheless, they argued that the contractor did not follow the right procedures to be awarded the tender that is; inviting interested bidders through advertising in national newspapers.

“We are petitioning the ground and criteria under which a one (M/S RUKONGE ENTERPRISES LIMITED) was wrongly awarded this tender without advertisement in any national newspapers so as to invite all interested parties by UNRA.

In the petition, locals also expressed dismay on how the above-named contractor was awarded the tender decrying the mysterious circumstances under which the construction budget was approved.

They also contended that the contract was awarded to the said contractor basing on personal relationships, in which they claim some individuals in the works and transport ministry were well-positioned to award contracts, which is against the law.

“All those matters raised above, disclose matters of conflict of interest which is contrary to section 9 of the Anti-corruption act and leadership act of 2002,” read the petition.

They also demanded that the contractor shares BOQ’s with the prime minister’s office and other personnel in the district for accountability, supervision and monitoring process.

It is also alleged in the petition that the contractor started working on the said 2.8 KM road without consulting the technical staff of Buyende district or town council, a clear indicator of contempt, dishonesty, and lack of integrity.

He is also accused of arrogance by disregarding the importance of consultations with district council authorities, claiming that they are not his supervisors.

“…..UNRA failing to be independent enough in exercising its duties as per article 166 (d) of the constitution of Uganda as they failed to take an independent decision on the majority of irregularities indicated in this petition as they were misled and misguided by some individuals who need to be investigated,” read the letter.

Residents, therefore, called on the prime minister to terminate the contract, arguing that if its execution goes ahead, it would encourage more fraud and mass corruption in the works and transport ministry, leading to the wastage of the taxpayer’s money, which in turn would lead to poor service delivery.

UNRA has been involved in several construction scums causing the loss of millions of tax payer’s money. On September 2021, Ms Nabbanja terminated the Shs.1.8 billion contract for the construction of a 42 Km road in Kyegegwa district over shoddy works during her tour on DRDIP projects. Recently, the agency was in the news for payments to a contractor for roads in Karamoja who ran away with taxpayers’ money.

One dead as floods cut off Kabale-Kisoro Highway

One dead as floods cut off Kabale-Kisoro Highway