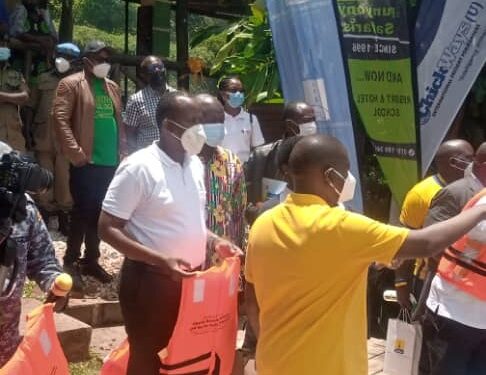 The state Minister In charge of Industries also the Ndorwa West legislator David Bahati has commended Uganda Revenue Authority-URA for saving lives of many ugandans and especially the school children through donating a motor boat to Bwama Primary school.

Bahati was on Friday officiating at the handover ceremony of the motor boat to the school by URA at Bunyonyi Safaris Resort Hotel at Lake Bunyonyi in Ndorwa West ,Kabale district.

URA together with 27 companies donated a motorboat and 70 life jackets worth 115 million shillings to Bwama Island primary school in Kitumba Sub County, Kabale district, in order to ensure safety of learners travelling at Lake Bunyonyi.

Mr.Bahati also contributed 10 million shillings for maintaining the donated motorboat. He however said that the government has already secured a total of 98 million US dollars for purchasing two ferries for Lake Bunyonyi and tarmac Kabale-Bunyonyi road.

Speaking at the handover of the boat and life jackets at Bunyonyi Safaris Resort, the URA Commissioner General John Rujoki Musinguzi said that the cause to the donation, came after a series of stories in 2017 that featured on different media house highlighting the plight of children who cross Lake Bunyonyi in the wee hours to access education at Bwama primary school which is located at the island, where the only means of transport available to them were rickety canoes which posed a threat.

Musinguzi said that URA sought partnership with the 27 companies, through a charity football match tournament dubbed the URA tax derby in October 2019, where they raised a tune of 74 million shillings, to which URA topped up with UGX 41 million shillings, as part of URA’s Corporate Social Responsibility (CSR) activities, in order to ease the education journey of tomorrow’s leaders and taxpayers.

The head teacher of Bwama primary school Robert Kanyoma said that the school which is a government aided with an enrollment of 312 learners lost a pupil in 2018 after drowning, where others survived because of having expertise in swimming. He added that they have been recently getting assistance of motor boats from Global Livingston Institution and Bulamu Community foundation and Nicky’s care for Africa to transport learners free of charge.