We are ready to support our own! Kampala city traders pledge to fly with Uganda Airlines 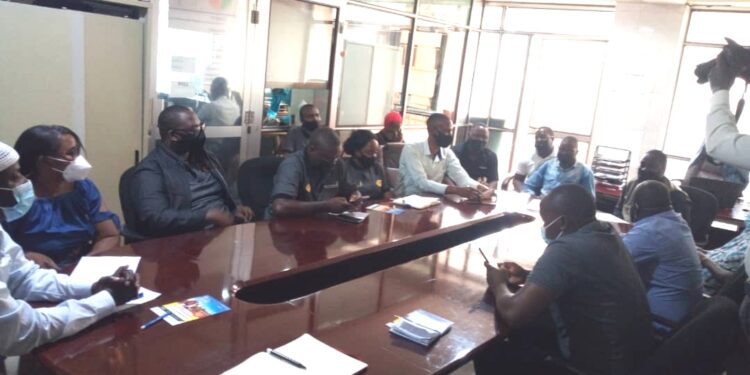 The Uganda Airlines team on Thursday paid a courtesy visit to Kampala City Traders Association (KACITA) leaders at their offices in downtown Kampala with the aim of courting them to ‘fly the Crane’.

The meeting was attended by Abel Mwesigye, the CEO at KACITA Uganda, Thadeus Musoke Nagenda, the KACITA Uganda Chairman, representatives of frequent fliers and tour operators.

Bashir Katende, the Chairman of Phones and Accessories importers, who fly frequently, expressed excitement about the direct flights to Dubai that Uganda Airlines is set to kickoff on 4th October 2021.

Katende said as patriotic Ugandans, they are ready to forego other carriers for Uganda Airlines on condition that the national Airline offers them preferential treatment like other airlines have been doing.

The traders asked Uganda Airlines Management to increase the number of kilograms from the current 69, arguing that it’s not competitive.

“We (frequent fliers) also want mileage from Uganda Airlines. For example, you can give a trader a free ticket upon hitting the set mileage,” Katende said, adding that the number of flights (3) per week to Dubai are a bit low. Traders also requested lounge services for frequent travellers. They also asked about the security of their goods, noting that a trader losing a phone worth Shs6m would be a big loss.

In response, Doreen Nambatya, the Ag. Sales & Marketing Manager at Uganda Airlines said they are going to honour the traders’ request to increase the number of kilograms they can import or export.

“We are offering you (traders) competitive rates. We are going to give traders priority,” Nambatya said, adding that they are going to look into all the issues raised by the traders.

On the issue of security, Nambatya said Uganda Airlines will soon start self-handling. This, she said, will make the Airline responsible for the goods of importers because the cargo will be handled by Uganda Airlines staff.

“Uganda Airlines was started because of people like you; fly Uganda Airlines, Build Uganda,” Nambatya said, adding that most of the food and drinks served on the national carrier are sourced from Uganda.

She said the Airbus which will be flying to Dubai is spacious and comfortable. She further urged importers to also ensure that they export goods from Uganda like naturally grown fruits.

To the tour operators, she urged them to woo foreign tourists and encourage them to ‘fly the Crane’ as they come to tour the wonders of Uganda.