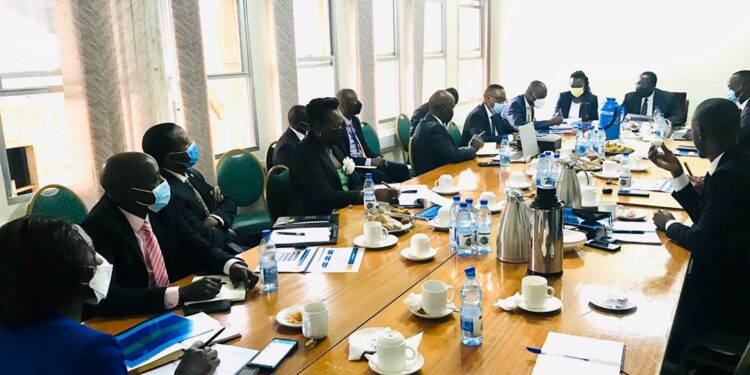 Kampala, Uganda:The Parliamentary Committee on Finance has hailed Housing Finance Bank for the good performance over the years and the important role played in reducing the housing deficit in Uganda.

This was during a meeting held on 16th September 2021 in which the Housing Finance Bank Managing Director, Michael Mugabi, along with a cross section of the leadership team appeared before the Parliamentary Committee on Finance to brief them on the mandate and performance of the bank.

The Members of Parliament were happy with the bank’s good performance over the years and promised to support efforts to capitalize the bank and to have the bank participate more in government programs like the Parish Development Model among others, whose aims are to deepen financial inclusion and support growth at grass root level.

For over 50 years now, Housing Finance Bank has continued to provide viable solutions that enable home ownership for all Ugandans.

The bank has entered into a number of partnerships with different developmental partners to facilitate the deployment of an affordable housing offer, enabling them to diversify the mortgage loan offer to include low and middle-income population who currently do not have access to an adequate financial offer from most commercial banks.

Housing Finance Bank is one of the 10 largest banks in Uganda and the leader in mortgage banking business, with deep local expertise spanning more than 50 years. First incorporated as a private limited company in 1967 as Housing Finance Company Uganda Limited, carrying out business as a non-banking credit institution providing mortgage finance and also accepting savings deposits from the public, the bank became licensed and regulated by Bank of Uganda as a Commercial Bank in 2007, to carry on the business of banking under the Financial Institutions Act and changed into a public limited liability company known as Housing Finance Bank Limited.