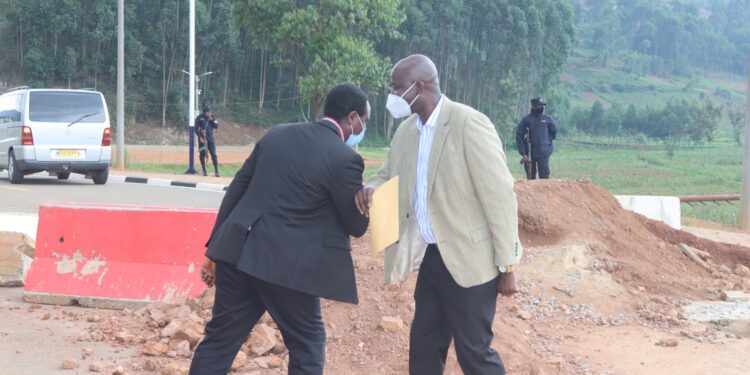 Drama ensued on Thursday when Rwandan authorities rejected a postmortem report that said a Rwandan national was murdered in Rwanda and body dumped in Uganda.

This happened as Uganda handed over two bodies of Rwandan nationals to the Kigali administration.

While explain to the Rwandan authorities what transpired, the Kabale district chairperson Nelson Nshangabasheija said one of the deceased,a Rwandan national Theoneste Dusabimana, 52, was a week ago killed in Rwanda, later his body dumped in Uganda in Rushaki village, Karujanga ward in Katuna town council, Kabale district.

Nshangabasheija said that the deceased was heard screaming from the Rwanda side on the 29th of August before his body was found dumped in Uganda the following morning.

However, the Felix Ndayambaje, the Mayor of Gicumbi District in Rwanda who led the Rwandan delegation at Gatuna border post rubbished the allegations, and said that the deceased had been living and working in Uganda, and that there was no way he could be murdered in Rwanda.

“The deceased had been living and working in Uganda, so how was he killed in Rwanda? His family is here and can testify,” Ndayambaje said.

Rwanda closed her borders with Uganda on 27th of February 2019 accusing Uganda of hosting and giving aid to her enemies. Rwanda also accused Uganda of harassing Rwandans living in the neighbouring country. To date, Rwanda
has not reopened the borders.

Since border closure, more than twelve people have been killed along the Uganda/Rwanda border.

President Paul Kagame advised his Rwandan people not to cross to Uganda, accusing Kampala of harassing his them.

Since then, he has deployed soldiers to guard the porous borders, as several Ugandans who attempt to cross to Rwanda are killed on sight.