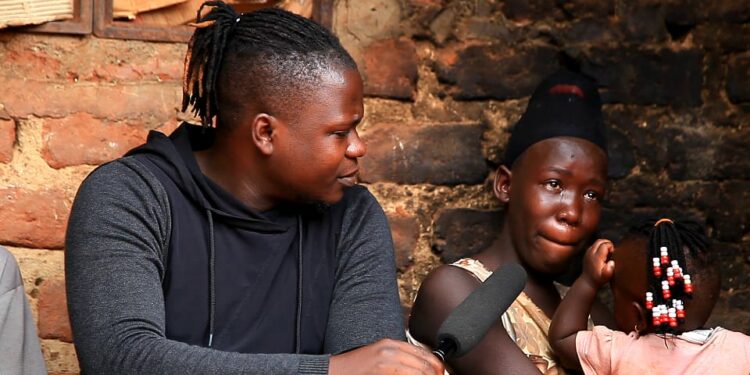 Living a meaningful life is a dream of every person alive. When one grows up, he/she yearns for Good education, good health, and a successful family.

At 17, most people see the best days of their lives lying ahead of them but for Rose Nabunnya, the story is different and too agonizing.

At a time when many of her peers are thinking about when schools locked down due to COVID-19 will open for them to return to studies, the teenager is constantly bothered about what her family of seven will feed on the next day.

Youtube Journalist Settumba Herbert aka Herbie King Uganda visited the trouble-hit family in Nanziga, Maya in Wakiso District, and had a tear-filled interview from which we wrote this story.

Nabunnya says her dream of becoming a doctor ended after her mother left home, with most of the motherly duties shifting to her as the father drowned himself in alcohol.

The father fell ill from a strange disease that ate up his feet, stopping him from his usual work of fetching water for sale as a source of the family’s livelihood.

In a desperate search for means to fend for her five siblings between 2 and 8, the helpless teenager found herself in a relationship with a man who offered some monetary benefits to buy food and other necessities at home.

Unfortunately, she became pregnant and now this meant another big responsibility on her head.

With a child whose father has since absconded from taking care, the load being carried by Nabunnya is one at least fit for women twice her age.

Her five siblings can only contribute to the troubled family’s livelihood by collecting leftover food from garbage collection bins and providing cheap labor in exchange for what to eat.

Her mother, who left nearly three years ago is said to have started her new life selling vegetables in the Bulenga market but she has not returned to check on her six children since.

Even though Nabunnya’s dream of excelling through education seems to be a dead one, she still wishes should get the means to see her siblings through. Asked what she intends to do to support the younger ones through school, all the hopeless teenage mother could do was shed tears. She is only hoping for a miracle.

Besides the worry of her dependant siblings, she also has a tiresome duty of looking for her weakly father who has been battling a strange disease in his feet that has since rendered him immobile.

As a woman, meeting monthly periods has been her worst nightmare. For a teen breadwinner of a family of 8, jobless and breastfeeding, affording sanitary pads is only something she dreams about. She says whenever such times advance, all she does is improvise using old pieces of clothes. This, she says is a pain she is having to endure every other month, causing her a lot of despair.

Inside the worryingly dilapidated structure that serves home to the right is one reasonably dismembered mattress laid vertically so that all the 6 siblings can rest the upper parts of their bodies as the lower ones lay on the bear flow.

Although she is just 17 now, Nabunnya and their siblings seem to have concluded that the good days are over for good.

Their only slim hope is for a good Samaritan to come to their rescue to improve their living conditions and help see the rest of the children back to school.

Despite being a mother, Nabunnya says her goal of attaining a better future through education can be achieved. She says she would be interested in joining a technical institution for any technical course.