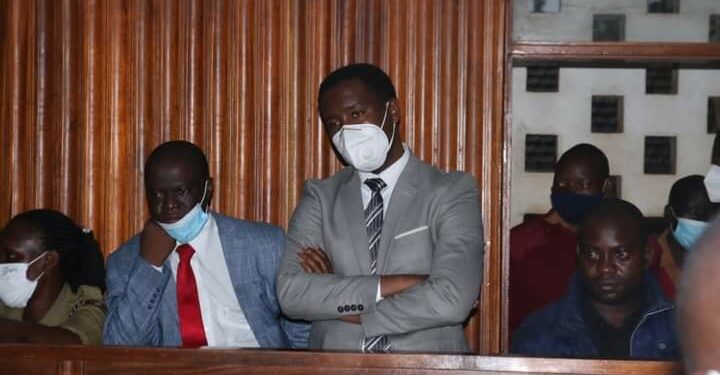 Members of Parliament Allan Ssewanyana (Makindye West) and Muhammad Ssegirinya (Kawempe North) have been remanded to Kitalya Prison until the 15th September, 2021 after being charged with murder.

The Masaka Chief Magistrates Court remanded the two legislators on Tuesday. They were charged with four counts; 3 of murder and 1 of attempted murder.

The two will be required to appear in court every after 14 days for 108 days.

Ssewanyana and Ssegirinya on Monday appeared before Masaka Central Police Station and make statements regarding the Masaka killings that have left over 30 people murdered.

Uganda Police said they have so far arrested 23 people suspected to have taken part in the vicious murders in Masaka and Lwengo districts.

Addressing, the media in Kampala, Police Spokesperson Fred Enanga disclosed that during interrogation, the suspects pinned Ssewanyana and Ssegirinya of recruiting them to commit the atrocities against the people of Greater Masaka region.

“Two Hon. Members of Parliament, namely; Hon. Allan Sewanyana and Hon. Muhammad Segirinya are appearing at Masaka District Police Headquarters for statement recording, as the masterminds behind the vicious murders. The suspects in their admissions clearly indicate how they were recruited, taken through the intentionally designed plans in a meeting at Ndeeba, and create animosity against elderly victims, who do not share their views,”Enanga said yesterday.

An additional 11 suspects are pending court, after their case files were sanctioned.

“The now 23 suspects, admitted to participating in the murderous rampage, and led the task team to selected scenes of crime, for reconstruction. The task team continues to hunt for Mulumba Kassim aged 25, who is on the run, after attempting to murder, Nakyanzi Maria Yozefu aged 61, in Kyotera . The victim’s condition is out of danger and progressing well.

“In addition, our task teams managed to foil attacks in Butenga, Bukomansimbi after machete welding assailants were sighted while looking for prospective murder victims. We want to thank the public in the three districts of Masaka, Lwengo and Bukomansimbi for volunteering information and for their level of increased vigilance. Some of the killers in Masaka and Lwengo were identified with the help of the community. Their cooperation has helped deter the vicious killers from spreading further havoc across the 3 districts.”