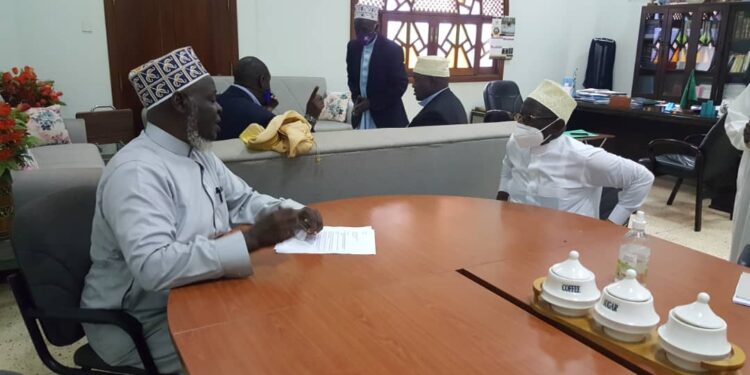 His Eminence Sheikh Shaban Ramadhan Mubajje, the Mufti of Uganda has expressed special thanks and glory to Allah for His divine favours that has enabled him sign a Communique on behalf of Uganda Muslim Supreme Council-UMSC and Sheikh Abdul Obeid Kamulegeya on behalf of breakaway Muslim faction.

The peace pact was signed on Friday 3rd September at the UMSC headquarters at Old Kampala.

“I am so much delighted today for the unity drive we initiated five years ago between me and our elder Sheikh Kamulegeya before we disclosed it to our confidants,” Sheikh Mubajje said.

He revealed that he had never dreamt of the day when Ugandan Muslims without any external intervention or influence would agree to unite to find solutions towards overcoming the challenges facing their Community.

“Truly Friday, September 3rd, 2021 shall remain a historical moment in the Annals of Muslim history all times to come,” remarked Sheikh Mubajje.

He traced his journey into Muslim leadership, which started shortly after completing his Islamic Theological Studies in Saudi Arabia in 1986. Sheikh Mubaje noted that he was appointed Imam Masqid Noor Mbale and went on to become the Kadhi of Bugisu Muslim District where he served for 10 years before he was elected Mufti of Uganda.

Sheikh Mubajje revealed that since his childhood he has witnessed various wrangles within the Muslim Community, which prompted him to offer himself to serve under UMSC for Unity and development. He informed his audience that over the last 20yrs UMSC has registered some physical developments, which has been dogged by lack of unity because of various interests.
He explained he opted for round table talks and pursued other avenues to establish cooperation with other faith groups, which saw UMSC join the Inter-Religious Council of Uganda, African Religious Councils and World Council of Religions for Peace International.

On his part, Sheikh Kamulegeya who led a delegation of prominent Sheikhs and elders, described the event as great, saying Muslims have finally restored peace, unity and brotherhood. Sheikh Kamulegeya took his listeners through the memorable 85 years of his life journey that saw him witness sharp wrangles and infighting among Muslims when he was only 10 years in the mid-1940s.

He went to narrate moving accounts on what transpired in the Muslim Community in the 1950s – 1960s up to the time he and his contemporaries conceived the idea of establishing an all-embracing Organization- National Association for the Advancement of Muslims in Uganda- NAAM before the formation of Uganda Muslim Supreme Council in 1972.

“We all agree that disunity has damaged our reputation and robbed us of all opportunities including lobbying national cake and political posts in the Government. So, I have resolved to come back for the sake of unity”. Said Sheikh Kamulegeya amidst chants of Allah is the Greatest. He noted that like other Muslim Countries individuals are free to form private associations under the official Muslim leadership.

A 3-page Communique based on 7 agreed grounds was signed by both sides, which they pledged to present to His Excellency Yoweri Museveni and other stakeholders. They are,
● That Sept 3rd 2021 all Muslims agreed to unite under one Leadership of UMSC,

● That UMSC is an umbrella body, which manages the affairs of all Muslims in Uganda provided other Organizations shall work under its guidance and consultation.

NITA-U and UNCDF partnership: Why the establishment of a Data Protection Portal is a milestone for Uganda

NITA-U and UNCDF partnership: Why the establishment of a Data Protection Portal is a milestone for Uganda