Gen Salim Saleh: The late Lokech played a crucial role in advocating for administrative and organizational reforms in the army 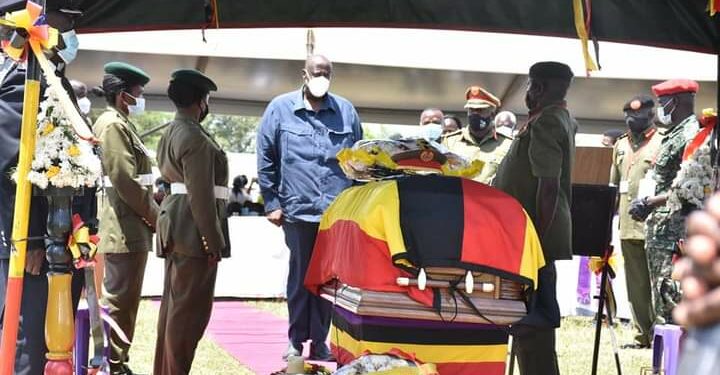 “Given his exemplary contribution in the last thirty years and given the fact that he had done all the leadership courses up to the National Defence College, South Africa in 2010 and given that I have never heard a report of corruption about him; I hereby use the authority given to me as President by Articles 98 and 99 promote Major General Paul Lokech Posthumously to the rank of Lieutenant General.” HE President Museveni said in a message that was read on his behalf by the Minister of Internal Affairs, Hon Maj Gen (Rtd) Kahinda Otafire during the late Lokech’s funeral service that was held at Paipir Primary School playground in Pader district.

Minister Otafire who was the immediate supervisor of the late Lt Gen Paul Lokech described the late as a very innovative person who he got to know when he was a Captain in the Democratic Republic of Congo where Gen Lokech used his ability to quickly think and lead his troops out of the thick forest cover where they had gotten lost.

The Special Presidential Advisor on Security and Coordinator of Operation Wealth Creation, Gen Salim Saleh while addressing the mourners described the late Lokech as a reformer who played a crucial role in advocating for the need of administrative and organizational reforms into the army where the late made an immense contribution.

While speaking at the funeral service, the Chief of Defence Forces, Gen Wilson Mbadi said that as the UPDF, Lt Gen Paul Lokech will be remembered for having been very instrumental both as an intelligence officer and Commander during the counter-insurgencies that plagued Northern and Eastern Uganda and also remembered during the operations in DRC when the late oversaw UPDF troops trekking over 700kms from DRC to the Mpondwe border.

In his sermon, retired Archbishop Henry Luke Orombi said that the Lt Gen Lokech lived a short but very meaningful life that touched many other lives, influenced and impacted many people and that is why his legacy will not die.

The funeral was attended by the Speaker of Parliament, Rt. Hon Jacob Oulanyah, the Chief Justice Alphonse Owiny-Dollo, the Former President of the Federal Republic of Somalia His Excellency Sharif Sheikh Ahmed, Cabinet and State Ministers, Members of Parliament, Religious Leaders, Generals and Service Chiefs among others.

Greater Masaka Insecurity: Minister Babalanda to Camp in The Area Ahead of a Two Day Interface With Security

Greater Masaka Insecurity: Minister Babalanda to Camp in The Area Ahead of a Two Day Interface With Security