They are back! Machete-wielding assailants strike again in Greater Masaka, kill 19 people in just 3 weeks

by Stephen Kalema
in National, News
3 1 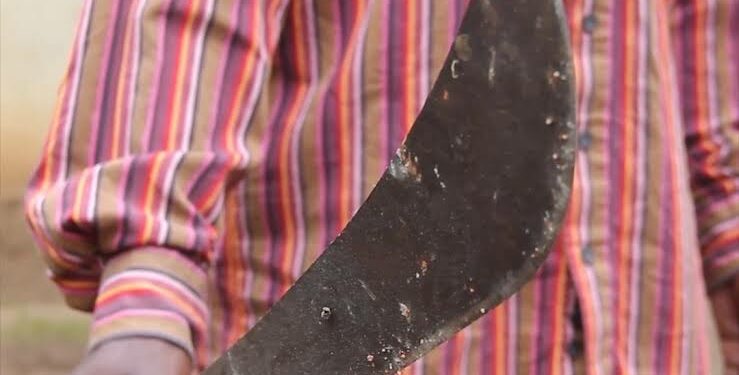 In 2017 and 2018, a ferocious criminal gang led by Muhammad Kiddawalime attacked, robbed and killed locals in Greater Masaka. They attacked people after dropping letters with prior warning. After a serious engagement and interventions of Uganda People’s Defence Forces (UPDF), Police and the local people, the group was dismantled and sanity was restored in the area.

In the course of events, six suspects were caught, four of them were sentenced to death by the Makindye Court Martial while the two were sentenced to 43 and 44 years. However, it seems the remnants of the original group are back in another strong and serious wave since so far 19 people have been killed in a space of 3 weeks.

In these three weeks, Masaka is now a hotspot for gruesome murders due to the continuous attacks on the locals by unknown machete-wielding assailants who are killing several locals almost every day.

Last week in one night, 9 people were attacked and 5 were killed in the districts of Lwengo, Masaka, Sembabule, and Bukomansimbi.

According to local authorities, the new wave is not different from the first one because two weeks back they also dropped leaflets warning of their plot to launch more attacks on locals.

In one of the leaflets that were seen by local newspaper- Daily Monitor, the assailants pointed out a few names of local businessmen and informed them that they intend to rob millions of shillings from them in addition to recruiting locals into what they term as a rebel group.

“We beg forgiveness for the long delay to visit your area since we last notified you about our plans to come. We have been busy traversing many other areas. But we have to get money from the following for us to carry out our activities well: Siraje Shs5m, Zibairi Shs3m, Kyobe Shs2m, Mulindwa Shs2m,” leaflet stated.

“The people of Kibinge Sub-county area, I greet you! I am the chief rebel and leader of a new group that has come out to fight the Museveni evil. There are people among you that we have identified and who are fit to join us to fight this evil given the level of their determination and braveness. We are going to persuade them to join us, but if persuasion fails, we will force them to become part of us. Here is the list of their names.,” one letter, written in Luganda, reads in part.

According to authorities in the region, it seems before launching their deliberate attacks on the people mentioned in the leaflets, the assailants have started with attacking single individuals with the help of the curfew to impart fear in the entire region.

On Thursday, residents discovered another body of an individual hacked to death. Peter Mayanja, a 35-year-old commonly known as Yeye- was found at Bisanje near the area parish in Kimanya, Kabonera Division in Masaka City.

His body was found just less than 12 hours after a 70-year-old woman Annet Nampijja brutally killed from her home in Kasaali village by unidentified assailants on Wednesday night.

In the wee hours of Sunday, assailants raided a house of Richard Mbaziira, 61 a catechist attached to Kingo Catholic Parish in Lwengo District in Kyabbogo Village, Kkingo Sub-County and was murdered by unknown assailants in Masaka Sub Region who buried his body in his coffee plantation, leaving the abdomen uncovered.