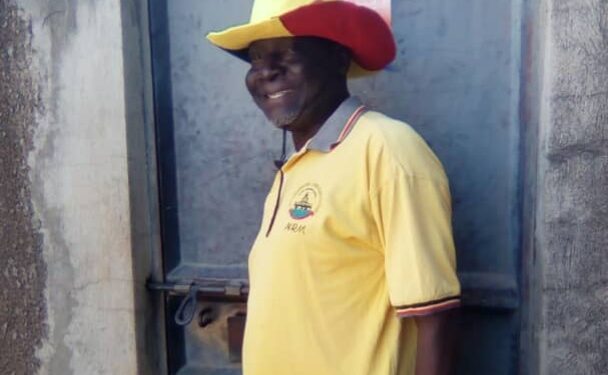 The deceased passed away on Saturday after months of frail health believed to have resulted from losing an election for the position of District Councillor which he had held since 2011.

Known for wearing his party colors of yellow with unmatched pride, Byansi is reported to have turned down all advice that he ditches his party in favor of the National Unity Platform which was trending in Muwayo at the time. Even when it continuously started appearing he was destined for a loss, the veteran politician would insist he would rather lose in a party whose principles he believes in than winning from where his heart didn’t belong.

As expected, March 2021 brought him a crushing defeat from which he reportedly never moved on. Sources close to the deceased told our reporter that Byansi’s health started deteriorating following the loss and never looked back since. The situation was even made worse by the sudden death of his son, a Parish Chief in Muterere SubCounty in Bugiri District about four months ago.

The two sad moments accelerated bottlenecks in the deceased’s health, amplifying his diabetic situation until his death late last week.

What however shocked the multitudes of mourners who attended his send-off was the threat of ” yellow instructions” he penned down to be religiously followed for his burial. Key among them were;

That all NRM members wear the party colors of yellow for his send-off event.

That NRM Secretary-General ( now former) Justine Kasule Lumumba should be the Chief Mourner at his burial.

That all the people to carry the casket with his body to the grave must be NRM members dressed in yellow outfits.

That all the outfits to dress his lifeless body should be yellow and,

That the flag for the NRM party should be wrapped around his casket as it’s sent underground for his final resting destination.

If not strictly observed, the late had threatened that he would refuse to be buried and his spirit would disturb the living.

Lumumba, who was out of the country on official duties was forced to address the mourners on the phone’s loudspeakers in observance of the fallen politician’s final wish.

Lumumba hailed the deceased’s spirit of consistency and sincerity belief in NRM.

She described the late as ” a rare kind” who belonged to NRM both in the day and the night. The minister challenged members of the party to emulate late Byansi in exhibiting loyalty to NRM.

Edrine Benesa, the NRM Regional Coordinator for Bukedi Sub Region under the Office of the NRM National Chairman(ONC) described Byansi as an outstanding pillar of the party whose courage, sincerity, and unwavering commitment will keep reverberating among the memories of party lovers. He also tasked the youthful party supporters to use the late as an example.

John Francis Okecho, the National General Secretary for the NRM Entrepreneurs’ League described the late as ” a true legend” whose impact will continue being felt even in death.

Byansi, an ardent NRM diehard was first elected to represent Buluguyi Sub County on the Bugiri District Council in 2011. In his first term, he was appointed Chairman of the production committee under the leadership of Hajji Azaalwa Malijan.

When Azaalwa lost the seat after a court conviction, and a by-election brought Hajji Siraje Smanya Lyavaala(RIP), Byansi was appointed Secretary Works, Production and Natural Resources. He would hold the position when he was reelected in 2016 until 2021 when he lost.