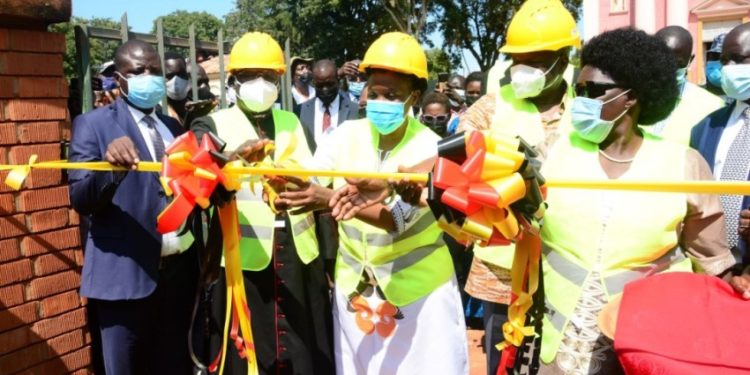 Tarmacking the 1.61km road that is now set to take course under the Uganda Support to Municipal Infrastructure Development (USMID) program of the lands ministry was a pledge by President Museveni during the 2016 presidential campaigns after various requests from the Cathedral.

Nabakooba who was received by the City’s woman legislator Betty Awol Ocan, St Joseph Cathedral Vicar General, City heads and security at the ground breaking called for transparency in the project execution.

She tasked the city authorities to use whatever avenue available to them to always update people about the status of the project at all times.

“Use all channels available to give the people of Gulu information relating to the Program; its status, costs and where you expect their input. Once the people understand the program and what is going on, you can be assured of a very fertile ground to operate in,” she said.

The minister further delegated the city officials to work hard and ensure service delivery reaches all people so that they can benefit from the fruits of the city status that was granted to them.

She underscored the role of urban development in terms of physical planning for the city to retain its prestige.

“You have good plans on paper but implementation. Let the regulations be followed, let whoever wants to build have a plan. You should educate the people that this is good for their region.”

Thanking the minister for her resilience and field-based kind of leadership, Awol said she is confident the implementation of projects under her stewardship will be on the right track.

“You are a very hard working woman and you make us proud as women. I call for your intervention into land conflicts here in our region because they are a big issue here. Land is being sold by young people even when their elders have not consented to the transactions,” the former Leader of Opposition in the 10th parliament said.

Awol requested the Minister to use her ministry and help them find means of reducing land conflicts in the region.

“We need a lot of attention in this area to steer economic growth to enhance wealth for the people.”

In her response, Nabakooba urged the people to make use of the call centre on the Toll Free line 0800 100 004 she set up at the Lands ministry to report all land related services for help and advice.

“I wish to encourage all the people of Gulu City to call in and report any cases relating to the mandate of my Ministry at the center and also the Ministry Zonal Office located here in Gulu. Please tell us how we are serving you. Both good and bad areas of concern should be brought to our attention. It is then that we can serve you better.”

According to Mr Alfred Okwonga, the Mayor of Gulu City, the commissioned road was a request by the Cathedral in 1993 when Pope John Paul 2 visited Uganda.

He explained that the government then promised to take on the responsibility of tarmacking the road even when Pope Paul had returned to his country.

“Slightly later, we got another promise from the president and today we are happy that the presidential pledge is being fulfilled,” he said.

He however expressed concern on the fact that the road will be short of 1.km to reach Gulu International Airport and called upon the contractors to throw in that little bit for the City as a thank you bonus.

“We thank the government so much for putting us in this program, this road will open the region to so many opportunities and development. It is therefore our pledge that since the contractor will be giving some thank you to the city, he could perhaps finish up the remaining kilometres to the airport.”