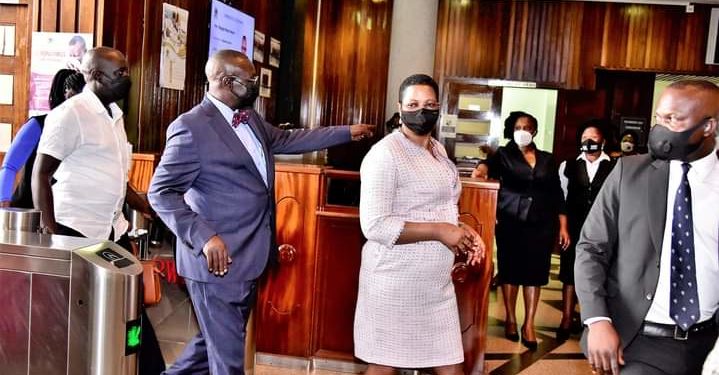 The Speaker of Parliament Jacob Oulanyah has on Thursday returned to office after taking over two months break.

Oulanyah was received by Deputy Speaker Anita Among, Leader of the Opposition Mathias Mpuuga among others.

Last Friday, the Speaker quietly returned to the country.

Oulanyah had been out of the country for one and half months. He last presided over Parliament at the reading of the 2021/2022 financial year budget at Kololo Independence Grounds.

His absence from the public had continued to raise speculation with several media reports indicating that he had tested positive for COVID-19.

There were also reports that he was allegedly transported to Entebbe International Airport in an ambulance and carried on a stretcher to the plane that evacuated him from Uganda.

The Director of Communications and Public Affairs at Parliament, Chris Obore, said that the Speaker had travelled to see one of his children in the United Kingdom- UK.

“He travelled to the UK, but this is in no way related to sickness or anything, but to see his son whom he had not seen in a long time,” Obore said.

Last Wednesday, Members of Parliament tasked Deputy Speaker Among about the continued absence of Oulanyah.