He ate Museveni’s money and refused to support him! Man who almost killed Tamale Mirundi’s son recently speaks out

by Mubiru Ivan
in National, News
25 1 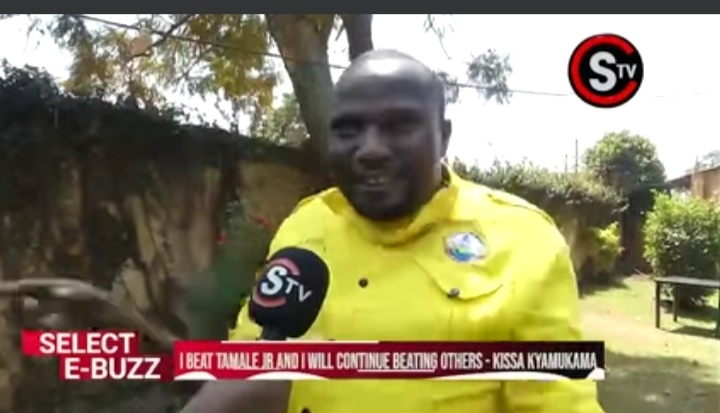 Kisakyamukama, the man who beat up Tamale Mirundi’s son recently has revealed why he pounced at the young man.

In March this year, Kisakyamukama attacked Tamale Mirundi Junior and beat him severely. The physical attack led to the admission of Junior to a city health facility where he spent days receiving medical care.

Appearing on STV’s Select E-Buzz show on Saturday, Kisakyamukama said he assaulted Mirundi Junior because he had eaten President Yoweri Museveni’s money and in turn he refused to support him.

I was helping him return home. He was lost. I beat up Junior because I was correcting him.You know Tamale Mirundi is a night dancer from Burundi and now President Yoweri Museveni paid school fees for his son throughout school and after enjoying his money he supported Bobi Wine. I’m warning others that I will beat you all if you eat Museveni’s money and then turn your back on him,” Kisakyamukama warned.

The NRM diehard also revealed that he is now tracing for the controversial political analyst so that he can also teach him a lesson for always abusing top government officials.

” After beating him, he is now back to NRM. Mirundi is a beggar, he cannot look for me, I instead looked for him and he ran away. I’m Kisakyamukama who beat up his son, I don’t belong to the army or police, if Mirundi wants me, he should come, I will deal with him. He also enjoyed Museveni’s money but he is always busy abusing government officials. Mirundi family should apologize to Museveni if not they will die miserably,”he added.

” I work as Museveni’s assistant dealing with stupid people.”

While on STV ‘Embuga’ show Mirundi knelt before viewers and asked Bobi Wine and group to help him track down and deal with the man who almost killed his son.

“I’m kneeling before you, I thank People Power supporters and my brother Bobi Wine who are hunting for the man called Yiga. This man comes from Gomba, this man abused the King of Buganda, he is a goon. One of his military soldiers is the one who beat up my son to the extent of breaking his jaw,” Mirundi said.

“My son will not be able to speak for the next six months. Please help, as I also use my intelligence machines to track down that man. Please look for that man, most of the time he is in lodges. Whoever beat my son , must suffer. Please help me, I’m an old man of 60 years, I have never knelt to ask for anything but this time round I have done so. Please look for that man who beat up my son and deal with him.”