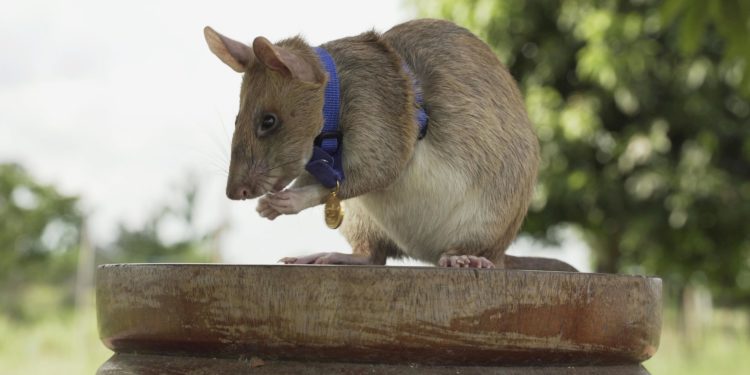 For many, thoughts of war cause fear and shockwaves but to Magawa- the African bred rat, it’s not the case.

For the last five years, Magawa has been in the landmine infested fields of Cambodia where it has helped sniff out 71 landmines and scores of other non explosives in the Asian country.

For his heroics, Magawa was awarded a gold medal for his work in the battle fields, detecting landmines.

According to Magawa’s handler Malen, age seems to be gradually catching up with the seven-year-old African giant pouched rodent and is “slowing down” and she wants to “respect his needs”.

Magawa was trained by Apopo – a Belgian registered non profit based in Tanzania where they have been breeding HERO rats to detect landmines since the 1990s. The rats are trained for a year and thereafter certified.

Apopo recently said a new batch of young rats had been assessed by the Cambodian Mine Action Centre (CMAC) and passed “with flying colours”.

Before Magawa’s final exit, he is expected to stay in the camp for a few more weeks to mentor the newly recruited rodents and help them settle in, said Malen, Magawa’s handler.

“Magawa’s performance has been unbeaten, and I have been proud to work side-by-side with him,” Malen told BBC News.

According to BBC,Magawa was awarded the PDSA Gold Medal – sometimes described as the George Cross for animals last September – for his “life-saving devotion to duty”. He became the first rat to be given the medal in the charity’s 77-year history.

At 1.2kg (2.6lb) and I0cm (28in) long, though far larger than many other rat species, Magawa is still small enough and light enough to walk over a landmine without triggering it.

BBC says that the rats are trained to detect a chemical compound within the explosives, meaning they ignore scrap metal and can search for mines more quickly. Once they find an explosive, they scratch the top to alert their human co-workers.

Magawa is capable of searching a field the size of a tennis court in just 20 minutes – something Apopo says would take a person with a metal detector between one and four days.