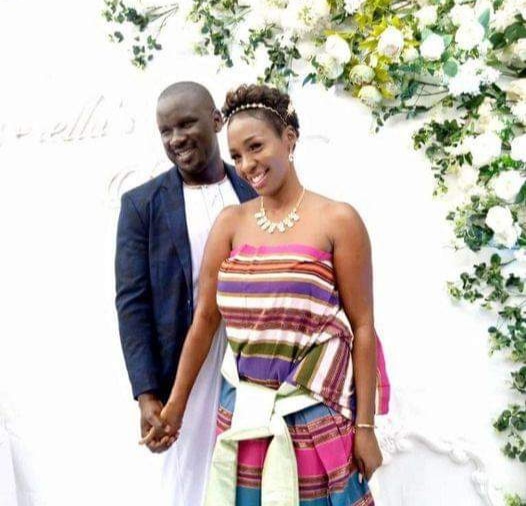 Cindy with her lover Joel Atiku

Singer Cinderella Sanyu has explained to her fans why she didn’t look so good at her kukyala ceremony last week.

Over the weekend, the ‘King Herself’ introduced her fiancée Joel Atiku to her family in a private Kukyala ceremony, but a lot has been said about the singer’s bridal attire.

At the ceremony, Cindy wore a Kikooyi attire but concerned social media in-laws were disappointed by how the singer looked terrible in the outfit, saying that they expected her to make a great selection.

However, these negative comments on her attire didn’t come as a surprise, and during an interview on Spark TV on Tuesday, Cindy confessed that she also realised that she looked terrible but people should accept that naturally she doesn’t look great in traditional wears.

“People should know that traditional attires disturb me a lot, you remember even at Rema’s introduction I struggled a lot with the gomesi. I am not so good at traditional attire. I accept it and I want people to accept it too. you know we always wear a lot of clothes inside so they disturb me a lot and can’t walk well, so I am sorry but that isn’t my thing,” she said.

The ‘boom party’ singer added that she never invited anyone to her function because they were not sure if parents would give them a go ahead, so the event was basically a family thing, but their Introduction and wedding dates will be communicated publicly.

“I didn’t think the parents would accept our relationship but things went on better than we expected and everything is okay now.”

ISANGA BRIAN: Why the lady in Kategere Sextape is not Hon. Baroda Kayanga