We need low-cost transport and energy to spur production – Museveni

The British High Commissioner to Uganda, Kate Airey said with Uganda Airlines coming on board, the country should get its exports to UK and Europe working. 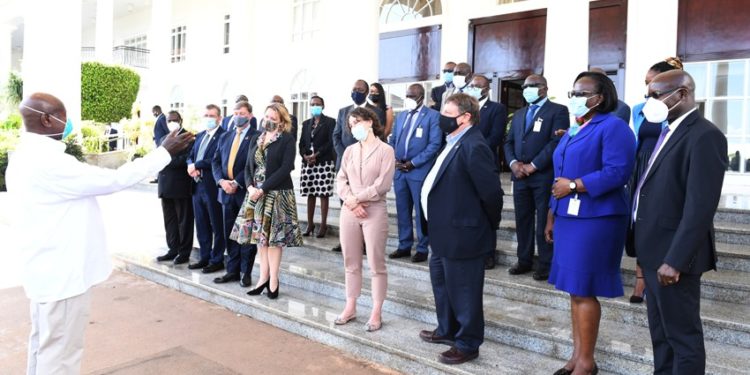 STATE HOUSE, ENTEBBE: President Yoweri Museveni has said the country needs lo-cost transport and energy for manufacturing to spur production and growth, adding that the country would rather borrow and implement projects if they can fit in the debt ceiling.

The President was yesterday meeting the Directors of Alvan Blanc and Colas from the United Kingdom, led by British High Commissioner to Uganda, Kate Airey at State House Entebbe.

They expressed their interest in the development of the agricultural sector and infrastructure in Kampala and various border posts.  They also want to investment in Kampala city roads, Agriculture Export facilitation project cold storage, pesticides and pests, key blocks for export.

The meeting was attended by the KCCA Executive Director Dorothy Kisaka, the deputy treasure, the deputy Secretary to the Treasury Patric Ocailap and officials from the Ministry of Finance.

“It is a struggle for the competitiveness of our projects which get influenced by the high cost of electricity. When you borrow for a dam…borrowing for dam is not problem as long as it is within the debt ceiling. The problem would be for private financing! When they finance a dam or distribution network, they put profits on tarrif and final price is very high for producers for manufacturing we don’t want that… it hurts ourselves,” he said.

“Private Capital can go for night clubs, If tariffs are high, they don’t go. But for transport and manufacturing we need low costs. Government would rather borrow and implement project if it can fit in the debt ceiling. The private sector… its good but the problem is that it can distort tariff,” he said.

The British High Commissioner to Uganda, Kate Airey said with Uganda Airlines coming on board, the country should get its exports to UK and Europe working.

Alvan Blanc and Colas has already signed a partnership between Uganda’s Ministry of Agriculture, Animal Industry and Fisheries (MAAIF) for the improvement in farm mechanization and post- harvest crop preservation and processing, that is hoped to improve the quality of Uganda’s Agricultural exports and resultantly spur economic growth.