I am not under arrest or in any cash scandal -Balyeku

Outgoing Jinja West MP Moses Balyeku has spoken out about the ongoing social media banter about his alleged involvement in a money scandal and arrest.

Balyeku, through his lawyers Galisonga & Co. Advocates has clarified that the bank statement obtained for the official Financial institution, Tropical Bank LTD shows that Mr Balyeku had not authorized any release of monies. 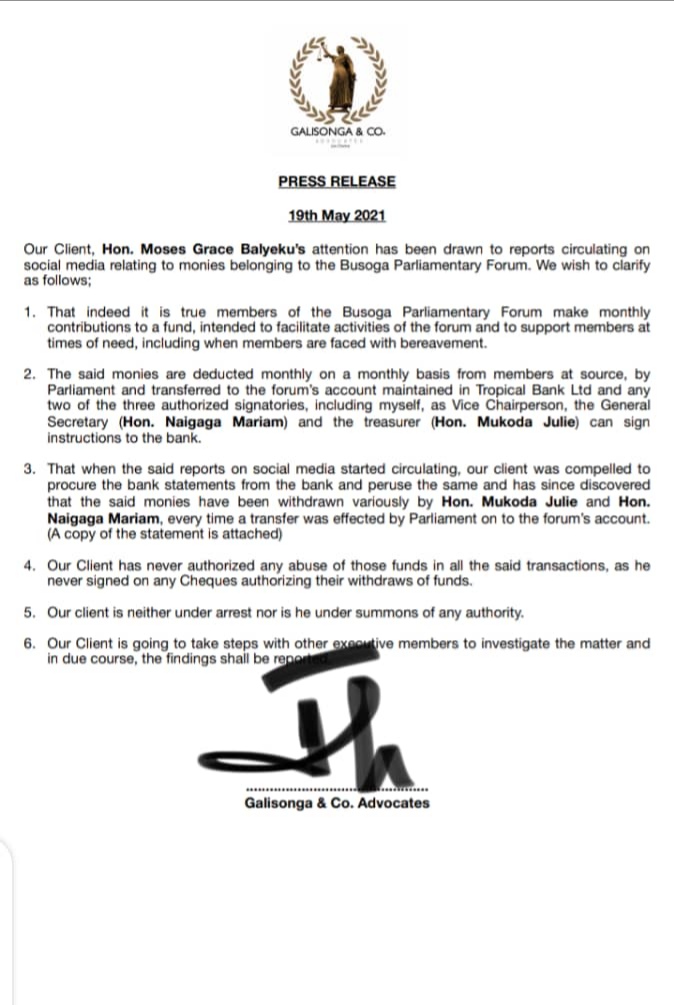 This follows media reports that Balyeku and two other signatories to the Busoga Parliamentary Group had fraudulently withdrawn Shs240m.

However, the statement issued by Balyeku’s lawyers indicated that the money in question has been withdrawn by two other signatories.

“We wish to clarify that when the said reports on social media started circulating, our client was compelled to
procure the bank statements from the bank and peruse the same and has since discovered
that the said monies have been withdrawn variously by the caucus Treasurer Hon. Mukoda Julie and the Secretary General Hon.
Naigaga Mariam, every time a transfer was effected by Parliament on to the forum’s account.”

“Our Client has never authorized any abuse of those funds in all the said transactions, as he
never signed on any Cheques authorizing their withdraws of funds,” in part reads the statement.

Reports also indicated that the money had been raised through a monthly contribution from each member over time.

According to the Group Whip also outgoing Bukooli South MP Godfrey Mayende Dede, over Shs300 million had so far been collected by members.

In his response, Balyeku indicated that whereas it is true that the money had been collected on a monthly basis, he was not in any way connected to the withdrawal of the same

Balyeku promised to take steps with other executive members to investigate the matter and
in due course, the findings shall be reported.

DR IAN CLARKE: Why we have poverty in Uganda despite development

PROFILE: Who is Amama Mbabazi, the NRM historical likely to bounce back as Prime Minister or Vice President in Museveni’s new cabinet

PROFILE: Who is Amama Mbabazi, the NRM historical likely to bounce back as Prime Minister or Vice President in Museveni's new cabinet