10 new MPs to watch in the 11th Parliament and why 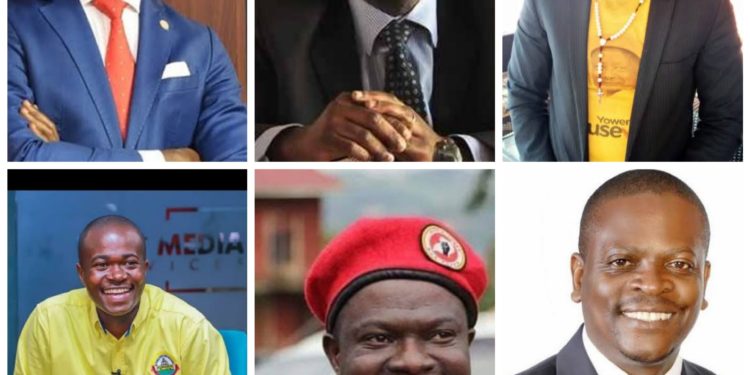 The swearing in exercise for the 529 MPs of the eleventh Parliament kicked off yesterday, Monday 17 is expected to run for 3 days. Among them were new members, who by the way form a significantly bigger percentage in composition.

Below, Watchdog’s Andrew Baba Buluba takes you through the ten new MPs expected to light up the house and why.

Joel Ssenyonyi is the MP for Nakawa West in Kampala. A close associate to opposition leader Robert Kyagulanyi Ssentamu and a Spokesperson for the National Unity Platform [NUP], Ssenyonyi joins the house with all the deserving pomp and the country will certainly be watching him keenly.

He is the MP elect for the newly created Kagoma South in Jinja District. A former member of the opposition Forum for Democratic Change [ FDC], Brandon has over the years made a name as a fearless fighter when it comes to defending the ideas he believes in and the interests of his people. Even before swearing-in, his contagious impact had already started getting felt among MPs as an outspoken mobiliser for Speaker Kadaga’s reelection. Only God knows but not even the sky will be the limit for Brandon for the next five years.

For starters, this will not be Bayiga’s first time in the August House. Having represented Buikwe in the 9th parliament, the outspoken Democratic Party [DP] stalwart sat on the sidelines for the last five years, only to bounce back in this year’s general elections. A purely proven refined debater with a wide understanding of national affairs, bating against his success in the house would totally be reckless.

The Kibanda North MP from Kiryandongo District is a born-lucky- born winner man.

Previously a presidential envoy to Mpigi, Kiryandoga and mostly recently Agago district, Linos made it through on his very first attempt. He brought down former President Idi Amin’s grandson Taban Amin in the August 2020 NRM primaries before comfortably winning the final vote on January 14.

Known for keeping his contagious love for Museveni, NRM Muhoozi and the Muhoozi project, one would only imagine how he will use the new platform to advance these ideals in the 11th parliament.

Dr Ayume is not only popular for trouncing arrogant Investment and Privatization Minister Evelyn Anite but also for the glamour with which he was elected to represent Koboko Municipality. Though a member of the ruling party, National Unity Platform leader Robert Kyagulanyi Ssentamu stunned the public when he drummed support for Ayume on his campaign trail in the district. Also a son to former Speaker of Parliament Late Francis Ayume, the country must surely be excited to watch what he will offer.

The 28 year old is the pioneer Women Representative for newly created Jinja City. She is also the only NUP MP who went through from the whole of Busoga. In a conversation with this News Publication early this year, Kyebakutikka noted that she is still irked by the fact that she went through alone.

She however vowed to tirelessly carry the load of her other MP candidates who failed and also pledged to keep Museveni and NRM out of Busoga for good. She is certainly one to watch.

Abed Bwanika, one of the most eloquent speakers in the country will finally hold an elective position in his life after trying since 2006. A three time Presidential candidate, Bwanika won the hearts of many through his moving oratory expertise despite performing dismally on each occasion. With a platform in Parliament, the veteran veterinary clinician will ably light up the house.

The new MP for Kawempe North has been surprising many people over the way he has been climbing the political ladder. Formerly a Kamapala Capital Authority Councillor, Ssegirinya, aka Mr Update’s political credential has been a subject of intense scrutiny. Many have in the past questioned how many correct sentences he can construct in English. This has even been made more exciting with questions over his academic papers. After all the wait is no longer big.

The firebrand Kasambya county MP in Mubende, just like Kibanda’s Ngompek made it to parliament on his very first attempt. An astute defender of the NRM party ideology and a ‘ Muhozist’ as well, Kabanda has been seen by many as a representative of a new crop of leaders in the party whosw majority of leaders have aged. The country will understandably wait to see what he becomes in the House.

After trying in the past without success, the FDC stalwart finally secured a slot in the eleventh parliament. One of the most refined law academicians in the country having taught law at Makerere for many years, Nsibambi’s addition to the House will certainly come with many expectations for the public.