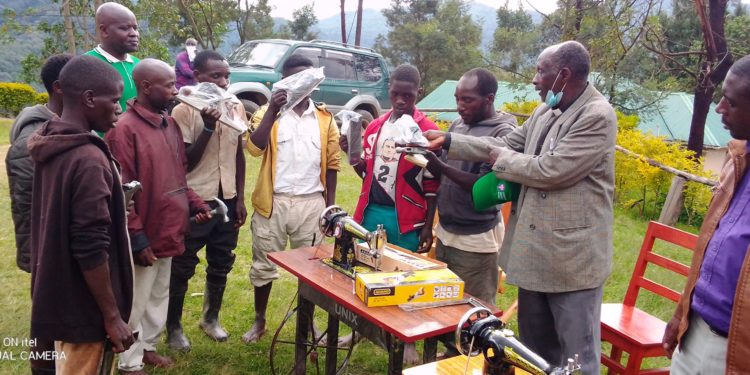 At least 40 people from the marginalized Batwa ethnic group have received sewing machines and carpentry materials to boost their income.

The Batwa hailing from Ryamihanda and Rushekye in Bukimbiri subcounty Kisoro District received the donation from Africa International Christian Ministry-AICM after several trainings on how to use them.

While handing over the donations,the programs director of AICM Denis Mucunguzi said he believed that the Batwa will nolonger be casual laborers since they had been trained and encouraged to be job creators.

He also revealed that AICM had received resources from Pilot Light Foundation to support the Batwa in life skills.

Tindarwesire Bosco,29, a carpenter and Kebirungi Sarah,19, both beneficiaries said they had been trained to use the machines before they received them from AICM .

The Batwa, who are described by many as the internally displaced persons in Uganda, are among the most marginalized Indigenous Minority Groups in the country.

Originally, the ‘Forest People’ who used to live in what later became the Semuliki, Mgahinga, Bwindi national parks and Ecuya Forest Reserve, the Batwa were forcefully evicted by Government in the early 1990s.

Since then, they have continued to suffer from cultural, social, economic and political injustices that have threatened their existence as people.