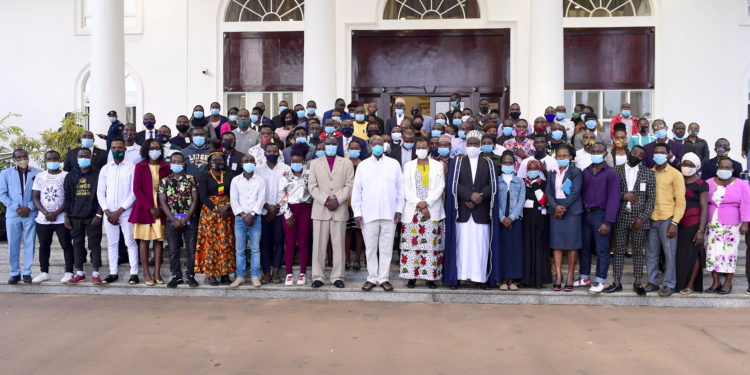 President Yoweri Kaguta Museveni together with the First Lady Janet Musevenei at the ceremony of the Disgruntled Youth Program organised by the Inter Religious Council of Uganda and the Launch of the First Demostration Farm located in Buikwe. They posed for a group photograph after the ceremony at State House in Entebbe in 30th March 2021.

STATE HOUSE, ENTEBBE: President Yoweri Museveni has urged the youth to have a change of mindset towards work and be practical in their approach towards income generation.

“Some of the problems of the youth that cause under productivity is lack of change in mind set and not being practical. It is not right for the youth to put blame onto their parents or government instead of blaming themselves for being lazy yet they have access to available resources like land for farming and they have the energy and tools,” he said.

The President, who was flanked by the First Lady and Minister of Education and Sports Janet Kataaha Museveni was yesterday speaking at a ‘scientific’ launch of Buikwe Youth Model Farm that at State House Entebbe and not in Buikwe district due to Covid-19 pandemic restrictions.

The farm is an initiative of the Interreligious Council of Uganda. The launch was witnessed by over a hundred youth who were previously homeless and others who are former street children and reformed juveniles.

He hailed the Inter Religious Council of Uganda (IRCU) fraternity for its initiative of transforming the vulnerable youths’ groups into useful citizens by equipping them with various resources to start up income generating projects.

“I thank IRC for emulating NRM policy of supporting the youth to run their own income generating activities to transform the economy, live a life of earning, saving and multiplying resources. I also thank the council for studying and identify the root causes that have rendered the youth in the country to be unproductive and for locating land resource in Buikwe district for the youth projects to take off,” he said.
Mr. Museveni told IRCU officials that government will provide all the necessary support saying the immediate required farm equipment like a tractor for ploughing, harrowing, a planter and support on water supply, a community will be provided.

The model farm is on 100 hundred acres of land on which different agricultural practices have been established.
The president however, said that part of the blame goes to the NRM secretariat for its weaknesses in not mobilizing the youth using economic transformation education.

The First Lady and Minister of Education and Sports Janet Museveni challenged the youths in the country who do not want to work on their parents’ land to develop themselves and yet yearn for most expensive items.

“It is indiscipline to acquire money in unlawful ways”, she said.

Mrs. Museveni noted that it is unfortunate for people of Africa on a beautiful, blessed land to be poor.
She said Ugandans should be proud to have a government that is people-centred, a government that plans for its people.

The Mufti of Uganda Shiekh Ramadan Mubajje who is also the chairman of IRCU noted that there was need to support unemployed, homeless, former street children, saying that the youth comprise 78% of the total population and are part of the process of securing the future.

“The youth are the owners of the future,” he said.

Bishop Joshua Lwere, the overseer of National Fellowship of Born-Again Pentecostal Churches of Uganda said that the Council, which comprises seven different religious denominations has mobilized over 2416 youth he described as ‘disgruntled young people’ from around the country who have participated in the council’s rehabilitation program.

The major objective is to address the problem of the youth being homeless and to reform them from criminal activities.
“This Model farm and others yet to be established in different parts of the country will also be beneficial to the surrounding communities,” he said.
The youth leader, Abdul Nasser Magezi said that in the process of mobilising the youth IRCU looked at ways of harnessing the youth economic empowerment by targeting untapped resources for social, economic benefits and security of the youth groups.