Do these 7 Ugandan politicians have any party allegiances?

by Mike Ssegawa
in News, Politics
13 0 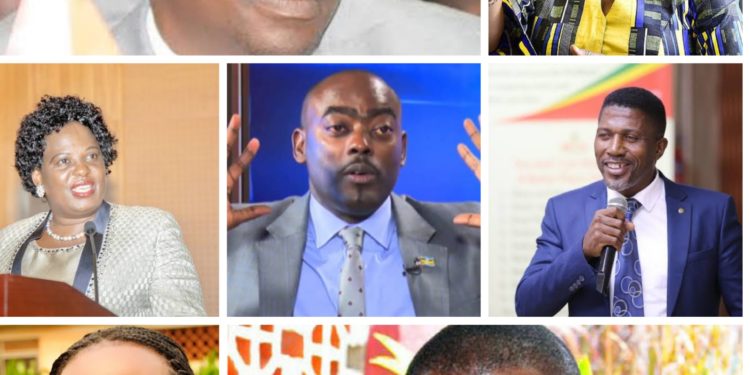 Uganda has one of the strangest politicians one can find. But also, the 2021 general elections brought out the worst in many politicians, as many proved to have no political stands or ideology save for winning elections.

Here some of the tested politicians who own or manage parties but denied them in broad daylight, out of convenience. The move raised questions on whether Ugandans understand multi parties, or not.

We all know Michael Mabikke is the president of the Social Democratic Party. The party is one of the active small parties in the country which has in past elections fielded candidates and won some seats.

However, the SDP top honcho has used his party ticket as a negotiation carrot, not to stand on it. In fact, when he was denied the National Unity Platform card in 2020, Mabikke went ahead and stood as an independent. He printed posters in NUP colors, with a “People Power” slogan. Nothing about SDP.

The move left many political confused, as to why a founder and head of a party would ditch his own and stand as Independent!

Pastor Abed Bwanika founded the People’s Development Party. He has been standing on the party ticket as president for the last three campaigns. This time around, he cut his coat to his size, standing for Kimanya-Kabonera constituencies in Masaka City. He won. But, his card was not PDP, it was NUP.

Bwanika, stood on NUP ticket without dissolving his party, and without any minute in his party entering a working relationship with NUP. The move is seen as political expediency to win an election. Bwanika is not NUP, he is PDP.

The minister for Kampala in the National Resistance Movement regime is also one of the biggest guns in the Uganda People Congress (UPC). Amongi wields a lot of power in UPC despite taking part in all major NRM activities. When election time came, she stood on her UPC ticket and won. On return to Kampala, she has been actively campaigning with NRM for Deputy Speaker Jacob Oulanyah who is vying for Speakership. At the same time, she has been mobilization UPC MPs to vote Oulanyah.

The founder of the Uganda Federal Alliance is now Minister for Lands in the National Resistance Movement government. Beti Namisango Kamya is one of the prominent opposition politicians who got appointed minister in 2016. She now campaigns for President Yoweri Museveni and one of the most loyal cadres that in 2021, Betty Kamya stood on NRM ticket in Lubaga North, and lost to Abubaker Kawalya, NUP. Kamya is still the founder and principal of the Uganda Federal Alliance and she belongs to another party without handing over power to another group.

The Nakawa West MP-elect has been Nakawa Division Mayor on SDP ticket and one of the most prominent members of the party as well as top principals.

Now, Balimwezo is NUP. He didn’t have to return his card. He is the mayor on SDP card, and MP on NUP.

We all know Naggayi is the founder of SDP. She has been MP for 15 years on Forum for Democratic Change. But before joining FDC, Nabillah was in People’s Progressive Party of Jaberi Bidandi Ssali. She ditched PPP at the last minute and joined FDC. In the just-concluded Kampala Lord mayoral race, Nabilah landed the NUP ticket out of the blue, but, she was already prepared to run as an independent.

The East African Legislative Assembly rep for Uganda is also deputy president of the Democratic Party. That didn’t stop him from abandoning his president Norbert Mao, who was presidential candidate, and lied that he had been cleared to campaign for Robert Kyagulanyi of NUP. Mbidde was on DP ticket in his bid for Nyendo Mukungwe, where he lost. However, when he realized NUP was on fire, he didn’t hesitate to throw away his DP to masquerade as NUP for a moment.