The judiciary has denied allegations by Supreme Court Judge Esther Kisakye that Chief Justice Alfonse Owiny-Dollo confiscated her file that contained a dissenting ruling in a withdrawn election petition that had been filed by former presidential candidate Robert Kyagulanyi alias Bobi Wine.

On Thursday the Supreme Court was drawn into drama when lady justice Kisakye confirmed to the media and the public that her file was confiscated under the orders of Chief Justice Dollo.

That my ruling would be read at a later date…Probably after he and the other members had finished debating about it. I found that order unconstitutional and I chose to disobey it. When I was appointed as a judge of this court in 2009, I swore to uphold the constitution of Uganda and I also took a judicial oath and I’m m acting based on those undertakings I made. I felt it is my constitutional duty to disobey the unlawful orders of the chief justice and fulfill my duty as a member of this quorum to deliver my decision within the 45 days under Article 104,” Justice Kisakye said.

“I informed the court that I will be delivering my consolidated rulings on the four applications. My colleagues have opted not to attend this afternoon session,” she added.

However, speaking about the matter, Solomon Muyita, the Judiciary Spokesperson refuted the allegations that the Chief Justice confiscated Justice Kisakye’s ruling file.

He added that the Lady Justice intentionally refused to share with the colleagues her file which forced her colleagues to shun her reading.

“On the morning of March 18, the Chief Justice and the other Justices asked Dr Kisakye to circulate to them copies of her ruling for perusal, as is the Court’s rule of practice. She told her colleagues that her ruling was only partly typed and partly in handwritten form. The Chief Justice then decided that they go to court to deliver the rulings that were ready,” said Muyita.

Muyita added that Justices; Rubby Aweri-Opio, Paul Mugamba, and Ezekiel Muhanguzi delivered the Court’s detailed rulings, which essentially allowed the petitioner’s application to withdraw the petition with orders that each of the parties bears their own costs.

“After the three justices’ rulings, the Chief Justice adjourned the Court for a 30-minute health break. The Court was to reconvene at 1:30pm for Justice Dr. Kisakye to read her dissenting ruling in the matter. During the health break, the Chief Justice and the other Justices waited for Justice Kisakye to circulate her ruling. She, however, stayed in her chambers up to 2 pm.

“Upon her return to the boardroom, she told the Chief Justice and the other Justices that she would not circulate her ruling, ready for delivery. Each of the Justices then told her that they would not go back to Court unless they have read her ruling,” he said.

He further noted that Justice Kisakye however, stormed out of the boardroom, a move that forced Chief Justice to direct the Registry to collect all the Judges’ files from the Court (tent) and bring them back to the court building since they were not returning to court. Justice Dollo also summoned the Attorney General to his Chambers with all the lawyers representing all the parties to brief them that one of the rulings was not ready and that the Court would reconvene on another date next week. Unknown to the Chief Justice and the other Justices, Justice Kisakye had proceeded to the Courtroom alone and read her ruling in the presence of a few advocates for the petitioner and the media.

“We wish to state that at no time did the Chief Justice even try to gag Lady Justice Kisakye, vet her ruling or confiscate her file as she is reported to have claimed. It is well known that the Supreme Court Justices respect each other’s independence,” he said. 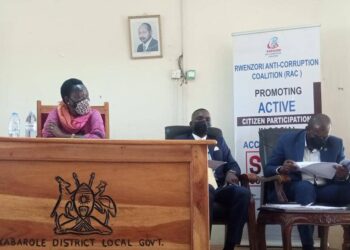