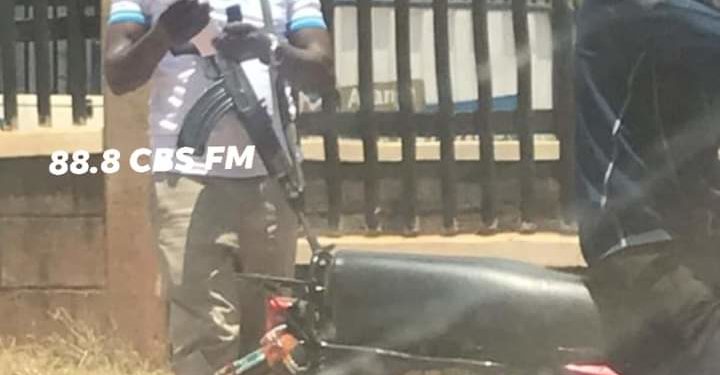 Occupants of Buganda owned Masengere building in Mengo were on Saturday thrown in disarray as an unidentified man armed with an AK47 riffle tried to force his way into the premises.

According to source at Bulange, the suspected assailant seemed to target Masengere – the building that houses CBS FM and BBS TV, both owned by the Kingdom.

CBS broke the news in a post on their official social media platforms moments after the suspicious arrival of the non uniformed man who seemed to be a security operative.

It’s reported that the said armed gentleman, clad in a casual outfit of a white collared T-shirt and a Khaki pair of trousers was dropped at the entrance of the establishment’s main building by a boda boda.

As soon as the motorcycle rider sped off, the man immediately started to attempt finding his was into the premises, throwing the inhabitants in utter panic.

“Unidentified armed man with AK47 gun without any known security agency uniform has been spotted being dropped by a bodaboda at Masengere Mengo. According to the sign language gestures, it seems he has been looking for the main entrance of the above building,” CBS posted.

The incident comes at a time when relationship between Mengo and the Central Government is at its weakest, with some government ministers coming out recently to fault the ruling party-NRM’s dismal performance in the just concluded presidential elections in Buganda on sectarianism.

To the kingdom loyalists whose memories of the 1966 palace invasion by the Obote administration are still fresh, such an act would invoke all it’s deserved panic.

By the time of filing this story, police had not yet come out with a comment on the incident.

WOMEN'S DAY: Female celebrities in Uganda and the cars they drive