Museveni’s reaction was sparked off by Mr Abigaba who asked the President to look into the possibility of appointing a body that caters for diplomacy issues concerning giant tech companies.

by Stephen Kalema
in News
10 0 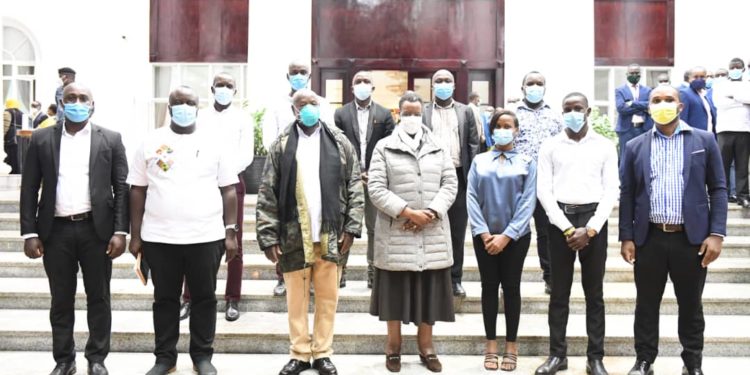 President Yoweri Museveni has said the limitation of access to the social media platform Facebook will not stop the most important things from happening in Uganda.

The President was speaking to a section of youth who were part of a group that campaigned for him and the NRM party using social media platforms.

The youth under their respective groups, led by Duncan Abigaba, the Deputy director of the Government Citizens Interaction Centre (GCIC) and Mathew Bagonza paid courtesy visit to the President at State House Entebbe.

In January, Facebook shutdown accounts belonging to some government officials and NRM bloggers accusing them of seeking to manipulate public debate ahead of elections that were to take place.

“This month, we removed a network of accounts and pages in Uganda that engaged in CIB (Coordinated Inauthentic Behavior) to target public debate ahead of the election,” Facebook’s head of communication for sub-Saharan Africa, Kezia Anim-Addo, said in an email.

The actions of the California-based giant technology company affected many people that were earning from the closed accounts and as a way of looking for the solution, they asked to meet President Museveni when he merged as the victor in the 2021 elections.

While meeting them at State House on Saturday President told them that Uganda will go on with or without Facebook’s support after all they have been not helping anything.

Museveni’s reaction was sparked off by Mr Abigaba who asked the President to look into the possibility of appointing a body that caters for diplomacy issues concerning giant tech companies.

“Your Excellency, many of us, including myself, are unable to access our Facebook accounts, not that lam devastated I take it as a badge of honour for fighting negative propaganda against this government. Your Excellency some countries have already done this, we request that you appoint someone to cater for digital diplomacy for our country,” he said.

However, President Museveni asked them to stop lamenting and focus on other things.

“Ever since Facebook closed your accounts and pages have you heard of any shortage of sugar in town? Don’t you have clothes? Facebook will talk, but we shall move, they are not God,” he said.

He said that tech giants acted with bias against accounts of pro-NRM people.

“We see how they are biased when they deleted our people’s accounts basing on their discriminating standards. You cannot say these were doing wrong, what about the other group that have been spreading all forms of wrong information and inciting our people? But what I heard is that God is omnipresent, omnipotent and omniscient and I have never heard that Facebook fits in the same category,” Museveni said.