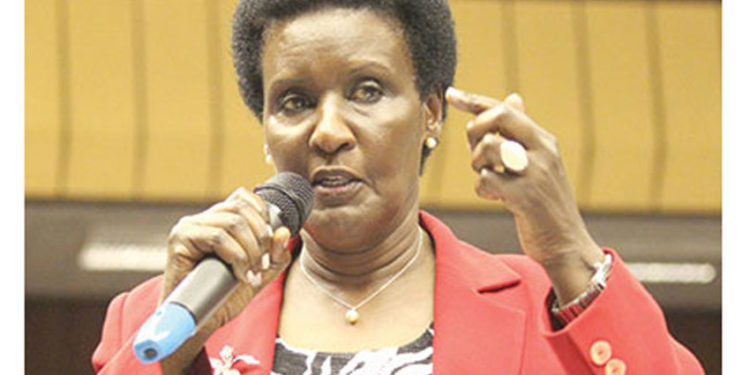 A section of MPs are calling for sanctions on Kenyan goods and services to retaliate against the current blockade on Ugandan dairy products by Nairobi.

In a statement to MPs on Wednesday, Trade and Industry Minister, Amelia Kyambadde suggested the government has exhausted diplomatic avenues to resolve the escalating trade war to no avail.

“…we have also summoned the Kenyan High Commissioner to Uganda and issued a diplomatic protest note but we have not got any response yet,” said Kyambadde.

The Kenyan authorities stopped Lato Milk claiming the product is substandard, among the troves of dairy traders. But a joint Committee investigated the claims and found them to be untrue, with the Kenyan side declining to sign the report on findings.

The Minister of State for East African Affairs, Julius Maganda said the quality talk is a ruse by Nairobi to frustrate the farmers because Ugandan farmers’ milk is cheaper than Kenya’s.

This discrepancy in pricing, said Maganda comes from the near total zero grazing in Kenya which is costly, as against Ugandan free-range practice that yields higher quality yet cheaper dairy products.

“They are using some avenues of failing us; that is the truth; but we don’t only sell milk to Kenya alone, we have identified other markets like the United States,” he said.

A last ditch diplomatic effort to resolve the crisis, said Hon Maganda, will take place on the 25th and 27th of February after which the East African Court of Justice will have to adjudicate the dispute.

Bugiri Municipality MP, Asuman Basalirwa said government should consider this as a dispute and invoke the provisions of the East African Treaty by suing the Kenyan government in an effort to protect its farmers.

Speaker Rebecca Kadaga criticised government for being slow on reciprocating Kenya’s recalcitrant behavior, saying private citizens should explore the avenue of suing Kenyan authorities as provided in the treaty.
“I am concerned about the inability to exercise the principle of reciprocity; the Ugandan government has been slow on acting yet farmers are suffering and there is nothing they are doing about their suffering,” she said.

“I want to encourage the people of Uganda to sue the government of Kenya; under the treaty, it is possible for citizens to take the countries to court,” she added.

The World Integrated Trade Solution, a subsidiary of the World Bank, last year reported Uganda’s export to Kenya to have surpassed the imports at $580 million as against $515.8 million stoking the trade tension.

President Museveni has been reluctant to escalate the trade war and has on various occasions rooted for a more integrated East Africa, terming the trade tensions as ‘non-ideological’.

Tanzania, Rwanda and Kenya have, however, rooted for market nationalism and have been skeptical of the fast-paced diplomatic efforts to political integration.