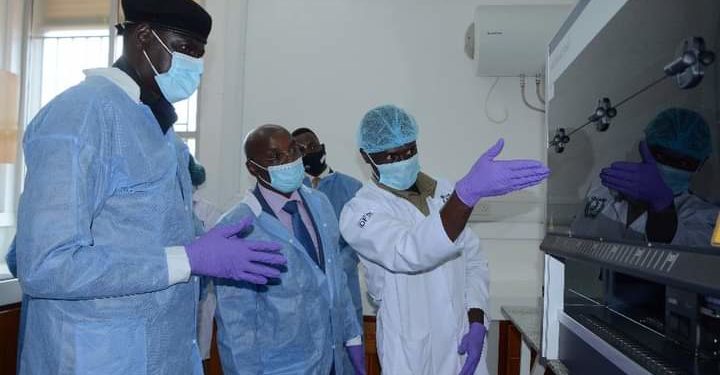 Uganda Police Force has been urged to invest more in forensic services in order to improve investigations capabilities.

“The facility (the laboratory) will not only support a speedy investigation but also improve the conviction rates (in Courts of law) hence the need to invest more resources in it,” The Principal Judge, Dr. Flavian Zeija said these while commissioning the Forensic Laboratory Capabilities at Police headquarters, Naguru, today (28/1/2021).

He said that forensic evidence is very crucial in investigation and its success does not come cheap but with a cost.

“The crime is becoming sophisticated and technology advancement keeps changing with time hence more training and investment in such machinery is needed” Dr. Zeija said.

He added that the Police leadership must be in position to train more officers especially in forensic science in order to have more man power to run the facility.

He said that there must be coordination and integrations of DATA Base between institutions like Police, NIRA, DPP and Court for the success of the project.

“It makes no sense for you to develop all the DNA Profile and if you bring them to court, The DPP must be in position to appreciate what is being done here to achieve a conviction,” the Principal Judge said.

The Inspector General of Police Okoth Ochola was represented at the function by his deputy Maj.Gen. Paul Lokech.He said that police management is committed in building a modern and professional Force in the country.

“Our major focus as Police Management is to rebuild and transform the Uganda Police Force in a modern, professional, service oriented, pro-people and effective institution. Key among the challenges has been the capacity gaps in terms of use of robust scientific methods of intelligence gathering and crime investigation,” the Inspector General of Police said these in a speech read for him by his Deputy Maj. Gen. Lokech.

He added that, the application of robust scientific methods such as these commissioned will enhance capacity to investigate crimes such as transnational crimes, cyber crimes, trafficking in drugs and persons, human sacrifice, trading in wildlife and their products, environmental related crimes, proliferation of small arms and light weapon.

The IGP added that, “The use of science in modern policing is key to investigations globally and we are now proud to have a directorate of Forensic Services that spearheads the application of science in our approach.”

As part of the strategy to prevent and detect crime, The IGP revealed that Police is emphasizing developing capacity to deal with gender and sexual based violence and the DNA capabilities commissioned are part of this capacity building.

The Police Boss said the commissioning is an addition to the efforts that are already underway to preserve Law and order in the country.

He revealed that they have now entrusted these capabilities to the Directorate of Forensic Services and encourage the forensic personnel to continue performing as a team whilst ensuring that these new capabilities are put in to proper use in the investigation of crimes.

According to the acting Director Forensic Services Superintendent of Police Andrew Mubiru, the directorate handles ballistic and tools marks, Crime identification, Chemical, Biological, Radiological, Nuclear and explosives analysis and cyber crime among others.

He said the directorate has drastically contributed to policing and exists to provision of scientific evidence to link suspects to specific criminal acts, identify offenders and criminals using fingerprints and photographs, Identify disaster victims using DNA and other scientific techniques.

Mubiru revealed that the Directorate has been hosting the East African Regional Forensic Referral Center of Excellence (RFRC) on behalf of the government of Uganda since 2012 adding that, the choice was based on the fact that Uganda had an existing dedicated laboratory, trained human resource and capacity to expand since plans are underway to establish an ultra-modern forensic center in line with the presidential directive made on the floor of parliament in June 2018.

MPs outline qualities their next Speaker must have

MPs outline qualities their next Speaker must have