How Museveni moved from liberating Uganda to forming peace in Africa 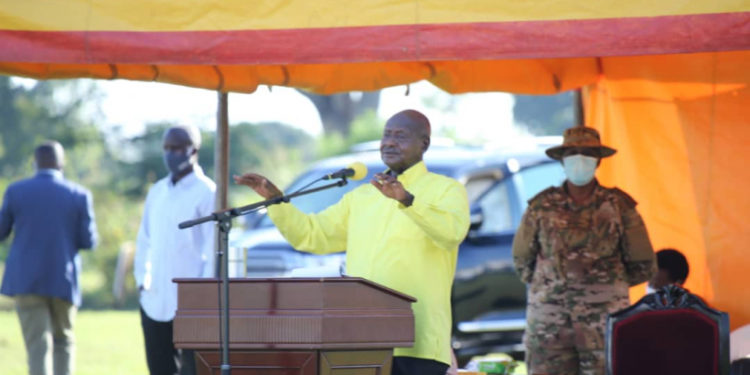 Following severe strains on livelihood caused by a collapsing economy, hyperinflation, at 200% and a nationwide food crisis, citizens of Sudan took to the streets in non-violent protests that led to the overthrow of long time president Omar al-Bashir. The crisis in the North African country had been caused by sanctions imposed on them, to the extent of placing Sudan on the US list of terrorist sponsors.

This came with a barrage of financial sanctions condemning the country to state failure, businesses are handicapped, no foreign direct investment and no relief from the International Monetary Fund and World Bank, leaving Sudan with a $72bn debt.

Months into power, Sudan’s new government sought to put an end to its crisis. The heads of the ruling body, the Sovereign Council, Gen Fattah al-Burhan sought the counsel of Uganda’s Yoweri Museveni. Earlier, Omal –al-Bashir had began the process of making peace with Uganda, having sponsored rebel activity in the North of the country for more than a decade. More so, Mr Museveni had also assisted al-Bashir to end rebel activity against Khartoum. Following Mr Museveni’s intervention, thousands of rebels put down their arms and returned to Khartoum to form a government. Al-Burhan was therefore also on a mission to consolidate that peace.

But more than peace and counsel, the Sudan government was aware of President Museveni’s connections in the West. They therefore sought to use those connections to negotiate their way out of financial doom. The meeting between the two generals, Museveni and al-Burhan discussed how Sudan can open a new page in its diplomacy by working with the United States and Israel, another long term foe of Sudan.

Mr Museveni, through US Secretary of State Mike Pompeo invited Israel Prime Minister Benjamin Netanyahu to Kampala to meet al-Burhan. Making peace between Israel and Sudan was important because it is one of the conditions that was set by the US government before considering relieving Sudan from the list of terrorist sponsors. Sudan, recognition of Israel would make it one of few Arab countries that recognize the young Israel. The meeting in Entebbe was low key because conservatives in Sudan remained hostile to having ties with Israel.

By brokering talks between Sudan and Israel, President Museveni was facilitating a process for Israel to make a long awaited breakthrough in creating wanted ties in Africa and the muslim world. Israel, by Mr Netanyahu’s admission, considered Sudan as a gateway to the Arab and African countries. According to the Israel prime minister, the meeting in Entebbe would help Israel build relations with countries in the Red Sea region.

Netanyahu is a close ally of the US, and making peace with Sudan was an opening for the troubled African country to getting the much wanted relief from the US and mend relations with the world, all facilitated by President Museveni. The meeting in Entebbe has months later developed into the US and Sudan agreeing on terms to scrap the African country off the dreaded list.

Furthermore, the US is planning a trade and investment conference and a high-level trade delegation to Sudan. This has also come with a promise from the US to engage the World Bank and the IMF to restructure Sudan’s $72 billion debt and also create more debt relief.

While helping Sudan to make peace with the world, President Museveni has also positioned Uganda as a major ally to super powers in the world. In a stable and peaceful Sudan, Uganda gains market for its goods, especially agricultural products. Sudan is one of the leading consumers of Uganda’s coffee, standing at about 17% of coffee from Uganda being taken by Sudan. More opportunities are bound to open up as the two countries continue working together to achieve peace.

DENIS JJUUKO: What next for the youth feeding posters during the campaigns?

DENIS JJUUKO: What next for the youth feeding posters during the campaigns?