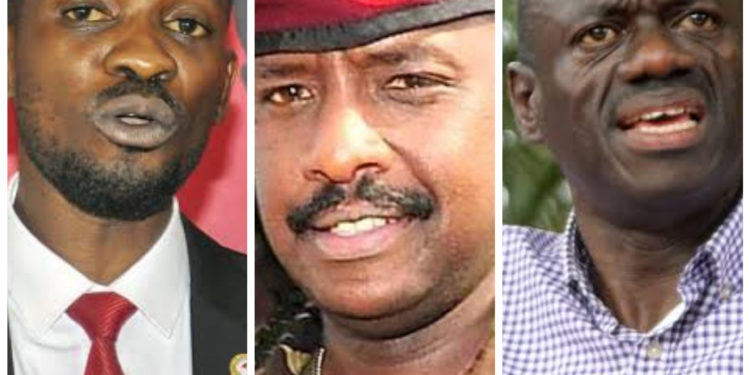 With just over a week left before the country goes to cast their vote for a president who will take charge for the next five years, political observers both aligned to the opposition and the ruling side have predicted the incumbent retaining the Presidency with each side citing varying circumstances.

Towards the tail end of 2020, President Yoweri Tibuhaburwa Museveni reinstated his son Lt General Muhoozi Kainerugaba to command the UPDF’s elite unit – the Special Forces Command (SFC) in a move many suspect is intended to move him forward in the succession queue should his father give way probably in 2026.

The need for strict loyalty from the army by Museveni especially after the sporadic November 18/19 riots has taken a center stage in discussions on the motive of the impromptu appointment given the fact that Muhoozi had manned the same Unit less than five years ago.

Never in the past has Muhoozi who by far remains the most popular figure among the NRM loyalists to succeed Museveni, been more active and controversial as he has been since bouncing back into active military service over a month ago.

Although Muhoozi seems to have identified Presidential Candidate Robert Kyagulanyi Ssentamu as his primary target for the series of provocative social media activities, he has not spared Dr Kizza Besigye either.

In November last year, the two faced off in a furnace hot social media crossfire after Besigye attacked Muhoozi’s wife over a fraudulent procurement deal at the Health Ministry which according to him had had over Shs100bn misappropriated.

In reference to the term “royals” as used by the four time Presidential Candidate,Mohoozi reminded him that he too had once dined with his family while in Sweden even when he is not a royal. He went on to challenge him to step forward and fight man to man and leave out the woman which suggested that the veteran politician was self relegating and thus the youthful general was offering a new window to re – elevate.

As things begin to look like they are cooling down, Besigye fires another shot which will naturally be a call for Muhoozi to retaliate.

While appearing on NBS TV’s morning Breeze talk show on Monday, the two decade long Museveni critic called for the the arrest of first son and be prosecuted over his controversial Twitter activities which he says offend the principle of the army being none partisan and non tribalistic.

“That office is a public office. All those tweets about the Banyankore, those tweets that some should not be this, those tweets of who can access power and those who cannot. Things like that are treasonable but you know nothing can actually happen to him because what he says is in defence of their power,” asserted the NRA bush war hero.

Even before Besigye’s comments today, Gen Muhoozi has been using social media to reach out to Uganda’s youngest constituency attracting admiration and controversy in equal measure. He has used twitter to praise the heroic exploits of his kin and kith, to chest thump about his military accomplishments and reminding those intending to destabilize Uganda’s peace that military might of UPDF will come full throttle at any slightest provocation.

And a few days ago, the Commander of Special Forces Command has been trending on Twitter when he aimed a jab at Uganda’s Presidential candidate Robert Kyagulanyi alias Bobi Wine.

His tweet on why the NUP leader dresses in military like outfits with completely no military training and a warning that he was destined for a humiliating defeat in this month’s general elections has set internet on fire. In retrospect, Bobi Wine fired back warning Muhoozi that not even his well equipped SFC would be able to save him and his family when the time to strike comes.

And to Muhoozi, it seemed like his plan was perfectly working. He had succeeded in luring his future arch rival to his bait. The attack on how it was insulting for Bobi Wine to call himself ‘ Musinguzi’ was naturally going to be a big controversy. But nonetheless Muhoozi would bring it forward as part of his hidden strategy. He would add that he was not part of the group of Banyankore who gave their daughter to a man unbefitting for a wife.

All this has been interested by a section of the public as an ill calculated Twitter use which could destroy the first son’s presidential ambitions but it doesn’t seem to be the case in the eyes of Gen Muhoozi.

To begin with, it is helping in easing pressure off his father who is involved in a battle of his lifetime to retain the presidency. In provoking Bobi Wine, he has managed to divert not only his followers on and off social media to discuss the two personalities but also the presidential candidate himself who has often spared time to respond to the attacks as Gen Museveni concentrates on the final touches for Jan 14.

It’s also helping Muhoozi cement the first son’s position as the man who will be most suitable to represent the ruling outfit against an opposition that’s most likely to be headed by Mr Wine for some years to come. By going full throttle against him as early as this, Muhoozi seems to be marketing his name inside NRM so that once the time comes to make a choice, he will be unchallengeable. And it seems to be working.

Watch out for his next tweet on Besigye’s call for his arrest.