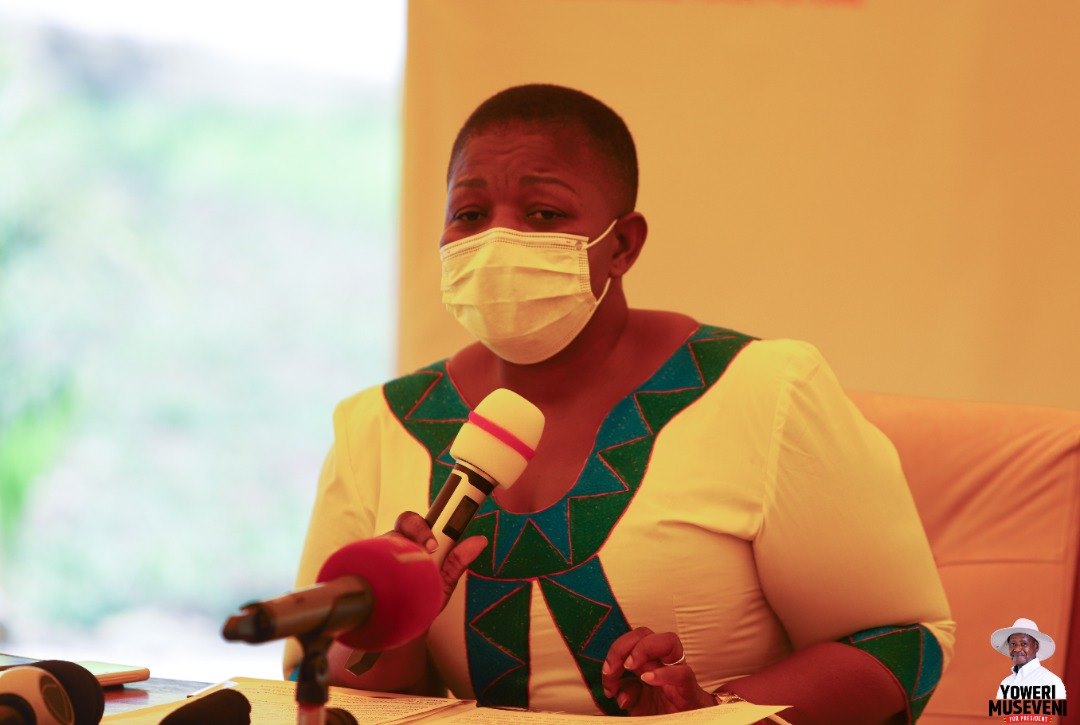 The National Resistance Movement (NRM) Secretary General Justine Kasule Lumumba has said she has never embezzled party funds as some people are alleging.

Addressing the media at the party headquarters on Sunday, Lumumba revealed that the claims are meant to frustrate NRM activities.

‘’If you observe the issue of money being sent to the district is changing from what has been the usual way of carrying resources in hands. We have dealt with it through using bank accounts whether to the flag bearers or to the district structures. The allowance we have been giving those who carry funds is now used as bank charges. What used to be the facilitation for those who carried funds is now used to facilitate the district, sub-county and village teams. It hurts because people had already set with budgets but please bear with us in this situation. We must manage under this situation because we are under big attack of the covid pandemic,’’ She said.

‘’The allegations going on are meant to de-motivate the people who are campaigning for the flag bearers and the people who are mobilising for the party. Please don’t be derailed. There is nobody who has taken anybody’s money. There is a procedure that is followed even if money is taken to the bank there is a procedure that must be followed. And supporting documents are available for those who wish to audit. We know that the new normal has hurt very many people but let us bear we must manage.’’ Lumumba asserts.

On the other hand, Lumumba also urged party mobilizers and supporters to limit large crowds as a way of controlling the novel COVID-19 pandemic.

Addressing the media at the party headquarters, Lumumba said that the party has rolled out the village-based campaigns, and the party is conscious about the Covid-19 pandemic. She requested the village mobilizers to embrace the new normal and limit cross district movements in their mobilization work.

‘’I want to call upon our mobilizers and supporters that campaigns are based at village level, at work places and at institutions. We encourage door-to-door, person-to-person, house-to-house mobilisation. I know we have so many NRM cadres so many NRM supporters who would have loved to move from one place to another to campaign for the party for all the candidates from president to local councils. But it is not so easy because we want everybody alive. That’s why we have emphasized on village based, work place, and institutions,’’ Lumumba said.

Lumumba also said that, as an institution, the party had to make changes to suit the new normal adding that funds from the party to support the different structures or individuals whether candidates or committees is banked directly to the district accounts.

‘’Every district has an account we opened up where funds are sent direct. These funds are managed by district leadership. The signatories are the chairman of the NRM in the district, the treasurer and the administrative secretary,’’ Lumumba adds.

She however noted that, for logistics like t-shirts, posters, manifestos, and any other materials got from the secretariat to the district, are sent direct to the district and the district leadership is supposed to deliver them to the villages.

‘’We are doing all these,’’ she said, ‘’ In an effort to reduce the numbers that come at the secretariat, reducing on exposure to the different people, leaders, supporters and members in order to reduce on the congestion. So it is our responsibility to protect every individual citizen of this country. We request NRM leaders to manifest good examples to the rest of the political parties.’’

Lumumba called on leaders of district, sub-counties for whatever materials they need to communicate through the call centre numbers for immediate help.

Bobi Wine refuses to show up at EC, says he is too busy with campaigns