by Lawrence Kazooba
in News, Politics
13 1 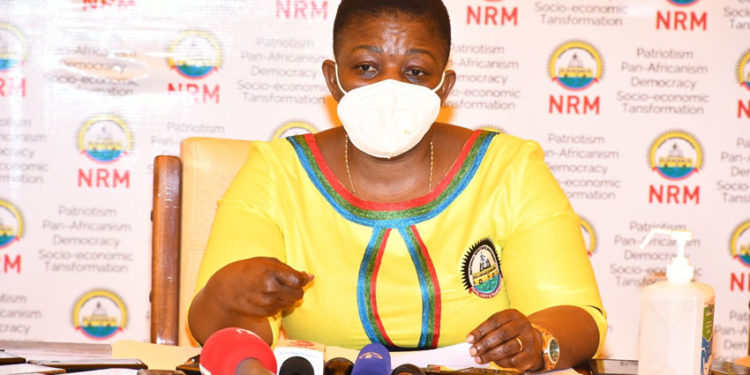 Reports that the secretary general of the National Resistance Movement, Mrs Justine Kasule Lumumba was bedridden with Covid-19 did not go down well with many sections of Uganda.

Instead of an over pouring of ‘get well soon’ messages, Lumumba was instead bombarded with lots of sarcastic or hard hitting messages.

Among the things that came out was that Ms Lumumba was using Covid-19 as a cover to hide from President Yoweri Museveni who was demanding accountability for funds he gave her to manage the campaigns. It has since emerged that over ugx50 billion was given to Lumumba and her team at the NRM secretariat but the party faithful are not happy with how money was used, save for billboards.

The illness that inflicted Lumumba brought out other things, including the following:

1. Disorganization of the party secretariat

It looks like the NRM secretariat didn’t expect a general election. Or rather, they underrated the opponents competing for power.

President Museveni had a false start to his campaign when he arrived in Luwero to an unfriendly crowd. Instead of waiting for him with tree branches and ululations, the Mecca of NRM had people along the road showing the president photos of his opponent Robert Kyagulanyi. Some even had the audacity of telling the president, “We are tired of you. We want Kyagulanyi. Go away.” Nevertheless, President Museveni had an election to kick start. He met a very small group of people, largely of party bigwigs who would vote for him anyway. The meeting was broadcasted live on televisions and radios. However, one could not miss the fatigue on the president’s face on his first day of campaigns. The campaign has gone on, albeit with few adjustments. However that didn’t happen with Lumumba in charge. When she self isolated two weeks back and her deputy Richard Todwong took the mantle, the campaign changed a little, with some positive vibe coming through.

We heard NRM electoral commission chairman Dr Tanga Odoi announcing that his office on Plot 13 Kyadondo Road, in Nakasero, was in three years’ arrears. This was humiliating because it has been reported that the secretariat has been paid to clear off all outstanding arrears including office rent. Lumumba indeed has no legitimate explanation for failing to remit rent.

With numbers running after Robert Kyagulanyi swelling, NRM doesn’t have a response to the opponent apart from decrying that he is flouting the covid-19 guidelines. As NRM people wait to be paid to attend President Museveni campaign, Bobi Wine’s supporters are braving teargas and bullets to break new barriers for their candidate. Museveni needs a solid strategy immediately to reduce the run time he has wasted with Lumumba tactics. These tactics are dry and devoid of excitement that should accompany a political candidate especially at the level of a presidential candidate.

4. Hide away from Museveni, NRM members during an election

With so many questions flying around, it was strategy that the captain of NRM was the first to pull off the campaign, albeit silently, to treat herself from Covid-19. Imagine how many others are about to test positive before the end of the campaigns. Lumumba as a person who has been meeting lots of people, especially in her party, has been exposed to Covid19 and surely, has exposed many others to the disease. With Mr Museveni very sensitive to his health, it is unlikely Lumumba will meet the president again, until the presidential election is over. This means she will have no serious role in the 2021 elections.

The focus of the government was that the opposition adhere to Covid-19 regulations. What we are seeing now is that there are so many government officials falling sick, and testing positive for Covid-19. It is a clear message that all groups in the political map don’t follow the set regulations to the letter. That explains the massive infections, even in the ruling party. Let us all keep Covid-19 safety measures including; testing on time, wearing masks, sanitise, keep a distance, and testing temperatures, among others.

6. Extravagance of the SG

We have heard that the secretary general is renting a floor on Hotel Africana to self isolate. Who does that? Imagine how many Ugandans can afford even a hotel room to treat themselves. The party diehards are on the streets and in villages combing voters to support their candidates. Many don’t have a single coin in their pockets. However, it sounds bad to hear the SG has rented an extravagant suite to recuperate from Covid-19. Incredible.

Richard Todwong has always shown honesty and empathy for the population. Only that he had no role in the party secretariat controlled by Lumumba. Now since he took over the reins of the party left without funds but in the middle of elections, you see troops moving together. Todwong sounds sane and on point in his message to party diehards. He is reassuring them that money will reach them on time. He is not cutting shortcuts. That is the kind of leader the party needs. One who allows everyone to do their role, and no walk over them. Todwong is not yet drunk on power gin, maybe he might save President Museveni the embarrassment of losing to Robert Kyagulanyi come January 14.