by Stephen Kalema
in News, Politics
13 1 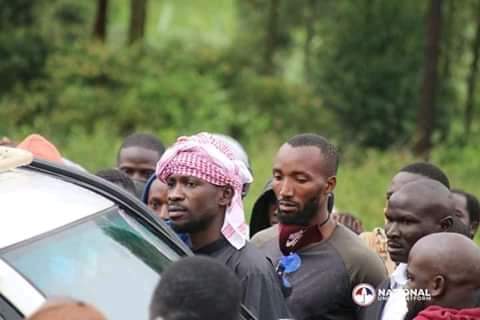 Bobi Wine and behind him is Norbert Elber Ariho

An exclusive footage showing that Norbert Elber Ariho was not the one who hurled a teargas canister near Bobi Wine has emerged.

On Tuesday, while in Kayunga, unidentified person threw a teargas canister near Bobi Wine real name Robert Kyagulanyi as he confronted security officers for disrupting his campaign meeting. Hours later, a video emerged pinning Ariho, one of Bobi Wine’s private body guards to have hurled the canister towards the presidential candidate.

However, the latest footage compiled by NBS TV’s Canary Mugume, shows that Ariho was not in possession of the teargas canister that exploded before injuring Bobi Wine’s friend Dan Magic and his police security detail head ASP Kato.

Sharing the new evidence exenorating Ariho from any wrong doing, Bobi Wine  accused the state of surviving on lies through its institutions.

He also tasked the Police Spokesperson Fred Enanga to apologise to Ugandans for lying with impunity.

“The Museveni regime has survived on lies they even lie through their institutions like we saw earlier today. Enanga should come out and apologize to Ugandans for lying with impunity,” the National Unity Platform (NUP) presidential flag bearer posted on his Facebook page on Wednesday.

Earlier in the day, Enanga had revealed that they were hunting for Ariho for alleged possession of teargas canister which was hurled behind Bobi Wine.

Enanga told the media on Wednesday that the Criminal Investigations Directorate (CID) is investigating Ariho’s intentions.

“Bobi Wine defied the police directives to move to Bukeka Playground, the designated campaign venue. It is at this stage that he jumped off his motor vehicle and had a verbal exchange with the commander of the police patrol car, registration number UP 5492. In the process, a tear gas canister was hurled from behind the candidate by a man who has now been identified as Ariho Elber Norbert who forms part of his security detail. The teargas canister fell on the vehicle right behind the candidate and went off. Several fragments and particles significantly injured a senior police officer, who is part of his security detail, together with a close associate of the candidate, who was injured while trying to place pointed nails on the car tyres to the police patrol pickup, to deflate them,” Enanga claimed.

VIDEO: Here is the evidence showing that Norbert Elber Ariho is innocent, he didn’t hurl any teargas canister near Bobi Wine